The Chief Minister of the Indian state of Jammu and Kashmir, Omar Abdullah, traveled to Leh on Saturday to open the annual Sindhu Darshan festival, which celebrates the peaceful, multi-cultural identity of Ladakh and modern India. The three-day annual festival, held at the time of the full moon in June, was first organized in 1997. 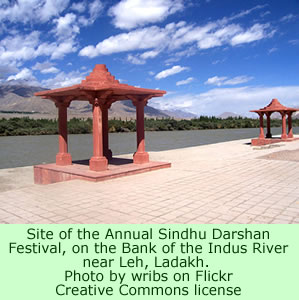 Sindhu is the Indian name for one of Asia’s longer rivers, known by the rest of the world as the Indus. It has its origin in the Chang Tang region of southwestern Tibet, and flows to the northwest into Ladakh. It continues to the northwest past the Line of Control into Pakistan, where it ultimately turns south and flows into the Arabian Sea.

Darshan is a Sanskrit word for “sight,” but it has larger connotations. The word often suggests visions of the divine, glimpses of a holy person, or, the reverse, being viewed, being visited, or receiving a blessing from a holy person or divinity—an event called a darshana. In other words, “darshan” suggests both perceiving, and being perceived by, holiness or divinity. Sindhu Darshan thus implies being in the presence of the holy river Indus, and giving and receiving blessing from the water.

The Sindhu Darshan festival, held in Ladakh and timed, of course, to coincide with the tourist season, celebrates the Indus River as a symbol of communal harmony in India. Participants from all over the country bring pottery vessels containing water from rivers in their own states. The opening ceremonies are held on the banks of the Indus at Shey, near the Ladakhi capital of Leh. During the ceremonies, everyone mixes their waters into the river, symbolizing the human mingling and the multi-dimensional harmony of the nation.

The reception ceremony is managed each year by a consortium of all the major religious organizations in Ladakh: the Ladakh Buddhist Association, the Shia Mailis, the Sunni Anjuman, the Moravian church, the Hindu Trust, and the Sikh Gurudwara Prabhandak Committee. Then, 50 Buddhist lamas hold a prayer service on the river bank. The rest of the day, for visitors, is filled with cultural events imported from all parts of India, plus sightseeing tours of the sights of Leh. The following day, organizers hold a puja, a Hindu religious service.

While the festival primarily symbolizes the cultural harmony and the peaceful co-existence of Ladakh and more broadly, of India as a whole, it also is meant to commemorate the armed forces of the country. Other officials present for the opening of the festival included Nawang Rigzin Jora, Minister of Tourism and Culture, Nasir Aslam Wani, Minister for Housing and Urban Development, and Tsering Dorji, Chief Executive Officer of the Ladakh Hill Development Council.

There is a Sindhu Darshan community page in Facebook.