Every year, a church in Santa Monica, California, hosts celebrations by immigrants from different Zapotec communities who seek to preserve the customs of their original villages. The Los Angeles Times ran an interesting story last Thursday about the changes in the church, St. Anne’s Church and Shrine, and the ways the Zapotec people from all over the West celebrate their annual festivities.

Apparently, a liberal priest, Father Michael Gutierrez, allowed what other Catholic churches in the Los Angels metropolitan area had denied—the privilege of basing an annual village celebration in his church. Other churches were unhappy with the Zapotec style of expressing their village pride—through processions, feasting, and lots of raucous noise.

Many decades ago, St. Anne’s attracted immigrants from other states in Mexico—Jalisco and Durango—but by the 1960s Zapotec people from Oaxaca also began to attend. Santa Monica was a more affordable area then, and the Zapotec, who primarily work in the service industries—as busboys, cooks, and housekeepers—were able to live in nearby apartments. People from different Zapotec communities in Mexico began to attend the church. Those from Tlacolula wanted to celebrate their patron saint, El Señor de Tlacolula, a black Jesus; folks from San Juan de la Villa wished to honor theirs, San Juan Bautista.

In recent years, news of the open-minded attitudes of Father Gutierrez spread, and groups originating in the villages of San Lucas Quiavini, San Miguel del Valle, and the state capital, Oaxaca, also started coming. Immigrants from Gustavo Diaz Ordez started attending this month—and, like the others, they wanted to add their saint to the roster of the church. All of this has increased membership in the parish.

The Zapotec people do not fit easily into the ways of many of the older church communities—they want to do everything their own way. Each Zapotec community in the West chooses a mayordomo to lead the annual celebration for the saint. A week-long feast in Oaxaca, which can cost $30,000, includes the chiming of bells, fireworks, and a community dance. It also includes the consumption of mescal, lots of it, an alcoholic beverage made from agave. Many priests in L.A. disapprove, and the local California ordinances do not permit the fireworks. Nonetheless, the Zapotecs do as much as they can to replicate the festivals in their own communities.

The challenge for St. Anne’s has been to attract the continuing attendance and support from the Zapotec people, many of whom come just for the feast then disappear for another year. The reporter described one corner of the church as filled with the statues of different Oaxaca village saints. Their feet were adorned, not by candles as is common in many Catholic churches, but by orange and white gladioluses in the Zapotec style. 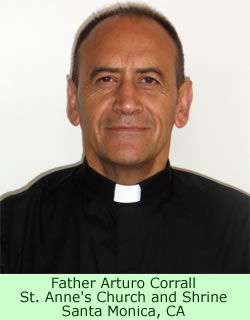 A year ago, after ten years of support, Father Gutierrez felt inundated by the increasing demands by residents of the many different Zapotec communities in L.A. for more celebrations. He resigned and moved to a church in Baldwin Park. Another open-minded priest, Father Arturo Corral, has taken his place. The tradition of accepting, and hosting, the village festivals continues to grow.

At one recent festival, for Santa Ana del Valle, Father Corral watched as women in the courtyard sold sweet baked breads and Oaxacan ice cream. Other traditional foods such as clayudas, thin tortillas, were piled nearby, along with shredded chickens, Oaxacan cheeses, beans and cabbages.

At the center of the activities, Jose Luis Garcia held a fake bull made out of plywood and pieces of fabric over his head and charged, in fun, at another member of the church. Father Corral observed that the way the Zapotec hold onto their native customs, while they slowly adapt to the rhythms of their new country, has characterized most immigrant groups into America over the centuries, including such peoples as the Italians and the Germans.