The Pang Lhabsol, one of Sikkim’s foremost festivals, celebrates the eternal peace declared 800 years ago between the original Lepcha inhabitants and the Bhutias, Tibetan Buddhist peoples who were then invading the region. 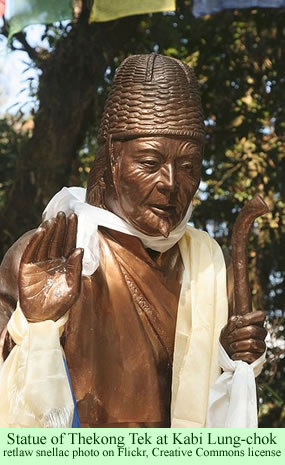 According to legend, Thekong Tek, the chief priest of the Lepcha, and Khye Bhumsa, the ancestor of the Bhutia monarchs, assembled with their followers near present-day Gangtok, the capital of the Indian state of Sikkim, to declare a peace treaty and swear their blood brotherhood. They invoked, as witnesses, the powerful spirits of the valley and the god Kanchenjunga, the holy mountain located on Sikkim’s western border with Nepal. Kanchenjunga is the third highest peak in the world and the location where humanity had begun, according to their mythology. The festival was celebrated last week at Kabi Lung-chok, about 17 km from the city, the same spot where the signing originally took place.

Mingma Tshering Bhutia, a local elder, told one news service last week during the festival, “Kabi Lung-chok holds significance for the treaty of blood and brotherhood signed by Khye Bhumsa and Thekong Tek in the presence of the guardian deity. Today is special to offer prayers for unity, prosperity and lasting peace for the Sikkimese people.”

In addition to the festivities at Kabi Lung-chok, the people pray for unity and peace to Mt. Kanchenjunga in the Tsuklakhang chapel, on the royal palace grounds in Gangtok. Monks and holy men face the sacred mountain and chant their prayers to reaffirm the bonds of brotherhood and prosperity. A statue of unity marks the historic treaty.

The festival celebrates the mountain itself, the witness to the historic treaty, as well as peace and brotherhood. In fact, the festival name, Phang, means “witness.” The festival includes both serious and light-hearted motifs. Jesters perform their antics and monks do special dances. 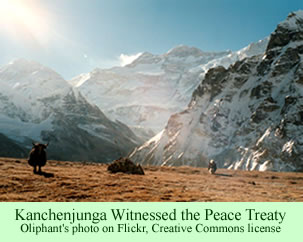 The third Chogyal, or king, of the Bhutias, Chador Namgyal, introduced into Sikkim the concept of Kanchenjunga as a war deity, a belief which also entered the celebrations of the peace treaty. To this day, the contradictory themes—a warrior versus a peaceful deity watching over the people—are celebrated at the festivals. Performances of masked dances and warrior dances provide more drama than at many other Buddhist festivals held in Asia.

The supreme commander of Kanchenjunga, Yabdu, wears a black mask. He is accompanied by warriors who wear the battle costumes of traditional Sikkim. Mahakala, the protector of the faith—the dharma—enters to provide a dramatic contrast in the warrior dance. He orders Yabdu and Kanchenjunga to not only defend the faith but to bring prosperity and peace to Sikkim.

The treaty witnessed by the mountain deity 800 years ago initiated an era of peace between an aboriginal society and an invading, more warrior, people. The new era of mixed populations, multiple cultures, differing traditions, contrasting religious beliefs, and, sometimes, conflicting habits has lasted for eight centuries. The interest of Pang Lhabsol is that it continues to celebrate the unity, tolerance, and peaceful prosperity of the Lepcha and Bhutia people. Kanchenjunga, still looks down from the wisps of clouds and presumably approves of the peacefulness in his valleys below—and the festivals that reaffirm the need for peace to triumph over war.