A generation or two ago, anthropologists celebrated the Ju/’hoansi as an archetypical peaceful society, a people who sometimes had their squabbles but who were so dependent on one another that serious fighting was simply out of the question. The scholars who were involved with various research projects in the Kalahari Desert described the ways the Ju/’hoansi, then called the !Kung, foraged for food, settled disputes, performed trance dances, raised children, and interacted more or less peacefully with one another.

In 1978, Patricia Draper wrote that the peaceful coexistence of a Ju/’hoansi group was its stored surplus. In other words, in a desert environment which is subject to wide local variations in food and water supplies, the ability of bands to get along with others was essential for everyone to survive when those resources became scarce. Peacefulness and a willingness to share territories during hard times equaled survival.

Richard B. Lee, however, in a monumental 1979 book, tried to dispel the notion that the Ju/’hoansi were always non-violent. His work provided statistics about the murders that had been recorded in their society, and it attempted to dampen romantic notions about the peacefulness of the people. Other scholars disputed his conclusions.

However peaceful the Ju/’hoansi may have been then, or may still be, they have certainly been one of the most highly studied small, traditional societies on earth. Several members of the Marshall family pioneered research on the Ju/’hoansi in the 1950s. Anthropologists in the Harvard Kalahari Research Group, now very senior scholars, continued to study them avidly, and many younger investigators have followed.

A recent journal article by Robert Hitchcock and others describes the history of the investigations of the San people in general, and the Ju/’hoansi in particular, over the past 50 years. The thrust of the current report is that the living conditions of the Ju/’hoansi were changing even in the 1960s and 1970s when the early research was being published.

Their article opens with the startling assertion that, by measures such as their standard of living, their mortality rates, or their land ownership, the San are worse off today than they were 50 years ago. But at the same time, they are much more involved with trying to promote their own conditions, more outspoken about what they want for their own futures. 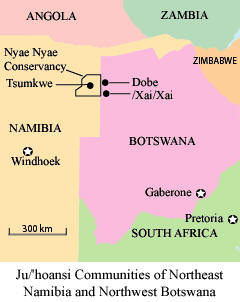 The article concentrates primarily on the Ju/’hoansi of the northwestern corner of Botswana, in the Dobe-/Xai/Xai area, where the members of the Harvard Kalahari Research Group did most of their research, rather than the Nyae Nyae region across the border in Namibia, where the Marshall family expedition had worked even earlier, in the 1950s.

As the scholars were focusing on different aspects of Ju/’hoansi life—which are summarized in the article—many of the San people began to abandon their nomadic, foraging lifestyles and migrate into permanent settlements that had better access to water, food, and health care. They did encounter some restrictions, particularly in Botswana, where they had to obtain licenses in order to hunt wildlife, permits that the government did not always make easily available. They were allowed to gather wild plant foods without government interference, except for the devil’s claw, which Botswana regulates. Gathering the devil’s claw for the export market is one of the major sources of income for the Ju/’hoansi across the border in the Nyae Nyae Conservancy.

The visiting anthropologists had to adapt to the changing needs of the people they were studying. Hitchcock et al. point out that the Ju/’hoansi themselves quickly began to take charge of the research that visiting scholars were attempting to do. They no longer wanted researchers to study them for the sake of their own interests. Instead, they wanted practical investigations that would aid their developmental agendas, projects that would have direct impacts on their needs. The Ju/’hoansi began attending meetings and speaking out at conferences in favor of their own interests.

The scholars thus became more involved in practical projects, many of them collaborative and participatory, that relate to development issues, land reform, adaptations to drought, access to water, environmental stresses, and social justice concerns. Local people see the benefits of the research to themselves, such as investigations that involve language training and educational practices.

Many of the more recent studies tend to be of a short term nature, addressed to finding the answers to specific questions, rather than long term, year long efforts as were done earlier. A sense of long-term trust between researchers and communities, the result of scholars living with people for many months, has suffered in this latest research environment, but the results, often determined by snapshot surveys conducted through interpreters, are useful nonetheless.

Hitchcock and his co-authors carefully review the ways the Botswana government has tried to interact with its indigenous minority peoples. They describe in detail some of the problems the Ju/’hoansi in that country have had to overcome over the past 40 years. For instance, at one point the government had to kill all the cattle in the area where the Ju/’hoansi live due to an outbreak of contagious bovine pleuropneumonia. The residents of the area were faced with a major crisis, which government handouts did not entirely ameliorate. Some fled across the border to Namibia, others went back to subsistence hunting, and still others moved into the Okavango Delta region of Botswana.

The Ju/’hoansi have tried to gain greater control over their traditional lands in Botswana, but they were not as successful as their relatives across the border in Namibia, which established the Nyae Nyae Conservancy for them. The Botswana Ju/’hoansi, however, have been able to participate in the government’s Community Based Natural Resource Management Program to work out issues such as local hunting arrangements.

But prejudice persists in that country. Hitchcock et al. quote one high ranking government official as saying, “If [the San] are in the way, [they] should be gotten out of the way … (p.180).”

Hitchcock and his colleagues provide a very useful overview of the complexities of life for the Ju/’hoansi in Botswana, and the ways anthropologists have interacted with them in recent decades. Fortunately, the article is freely available in PDF format on the Web.

Hitchcock, Robert K., Megan Biesele, and Wayne Babchuk. 2009. “Environmental Anthropology in the Kalahari: Development, Resettlement, and Ecological Change Among the San of Southern Africa.” Vis-à-vis: Explorations in Anthropology (9) no. 2: 170-188