Inuit teenagers in one community advocate better discipline in their school plus educational programs more focused on substantial learning and less on emotional well being. The students at the Kiilinik High School in Cambridge Bay, Nunavut, voiced many criticisms about their school last week to Nunatsiaqonline, particularly about some of the cultural programs and the lack of appropriate punishments. 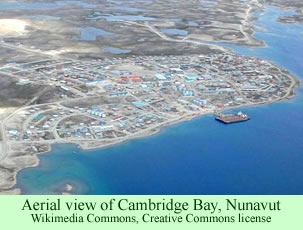 The news reporter interviewed groups of students in the Cambridge Bay high school and heard some tough sounding messages. In one 11th grade class, the students urged their school to focus more on concrete education rather than on the feelings of the young people. They are concerned that they must get good educations, since those who graduate from universities can then secure positions in the medical professions or as teachers. In their town, good jobs await people who are well educated, they realize.

The school used to send students who were late to a detention room, called the “personal reflection” room—dubbed the “prison room” by the students—but that practice was abandoned. Now they are just told to sit out in the hall. The students want to bring back the PR room. One girl told the press, “students need to know they can’t cut classes.” Many of the young people have dropped out of school, but the students who remain have no sympathy. If they can’t make it, they should be failed, they believe.

But they are not entirely hard-nosed. The students urge that more fun activities should be incorporated into the school, which might help lower the number of kids dropping out. They suggested that the Kiilinik High School should institute something they called “spirit days,” plus a winter prom. They also would like the school to bring back morning assemblies.

The kids dislike the multi-level style of classes. That practice aims to recognize the different levels at which students learn, but the Kiilinik 11th graders feel their teachers are having a hard time coping with the variations in skill levels in their classrooms. They criticize the cancellation of French classes, and they condemn the way the school is apparently not flunking out students who fail their courses.

They are critical of Nunavut’s aulaajaqtuut program, which tries to promote emotional well-being. Having people role-play a caribou hunt, figure out what their emotional needs are, and put them into clear statements strikes the Churchill Bay students as boring and useless. Some of them say they can understand some Inniunaqtun, the local Inuit language, but they admit they are not fluent.

The high school juniors were evidently glad to have the opportunity to express their opinions, which they said are rarely solicited. The parent of one of the students told the news service, “people have to get over looking at youth as a problem. They’re the solution.”