Next week, the Lorentz Center at Leiden University in the Netherlands is hosting a five day workshop, “Aggression and Peacemaking in an Evolutionary Context,” which could be of interest to students of peaceful societies.

The aim of the five-day meeting, October 18 – 22, is to bring together scholars in fields such as primatology, evolutionary biology, archaeology, the ecology of human behavior, and forager studies to review the latest developments in the evolution of conflict and dispute management. Specialists in fields such as nomadic studies, who have done research on cooperation, competition, and sharing; archaeologists who specialize in the pre-historic development of human violence; and primatologists who have worked on aggression, reconciliation, and conflict management in non-human species should have the opportunity to interact with one another. 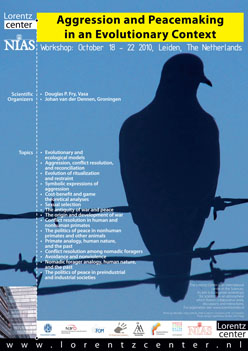 According to the website of the Lorentz Center, “relevant topics such as evolutionary models of conflict, restraint, ritualization, cost-benefit models of aggression, territorial defense, and resource competition … [will be included]. Findings from each of these disciplines pertain to the study of conflict within an evolutionary framework. This workshop takes a specific focus on how knowledge from these natural and social science fields may be integrated to produce a more complete view of aggression and peacemaking.”

The description of the workshop also states that the basic scientific findings in the fields of evolutionary biology and behavioral ecology “have implications for interpreting social behavior that to date have been under utilized.” Therefore, the long range goal of the meeting is “that some new applications of theory and subsequent collaborations between scientists from diverse fields will be germinated from the workshop.”

On Monday, October 18th, the program focuses on “The Antiquity of War and Peace,” and features a number of prominent scholars who have published on the subject. Tuesday’s program, “Evolutionary and Ecological Models and Theories,” will be moderated in the morning by Kirk Endicott, famed for his research and publications about the Batek.

The morning panel on Wednesday, October 20th, will be on “Forager Aggression and Conflict Management.” Participants will include Dr. Endicott and his wife, Karen Endicott, who also has published on the Batek. Thursday’s workshop will cover “Conflict Resolution in Human and Nonhuman Primates,” again with prominent scholars presenting.

On Friday, October 22nd, the conference will conclude with a session titled “Integration and Synthesis of Knowledge about Aggression and Peacemaking.” Scholars who are household names in this field, such as R. Brian Ferguson, Robert Sussman, Douglas Fry, and Johan van der Dennen, will be presenting. Fry and van der Dennen are the coordinators of the conference.

The purpose of the Lorentz Center, which is funded by Leiden University, is to host workshops that produce interaction and collaboration among scientists and scholars. The website lists the 44 participants who are planning, so far, to attend this workshop, but it also indicates that the center can accommodate up to 60 people, so it is possible registrants may still be accepted. The website registration form does not mention any registration charges. A contact link on the website provides an email address for people to use who might be interested in the possibility of getting involved, even at this late date.