Chris Brown left Tristan da Cunha after a three-year stay, but he still thinks it is “a remarkable place with remarkable people…” If he could, he said, he’d like to go back. Father Brown was the Anglican priest at St. Mary’s Church on the island from 2007 until July 2010. 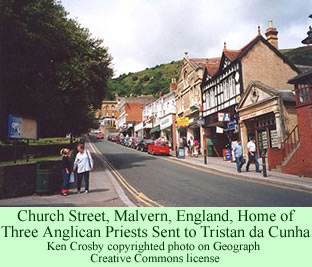 Like Tristan da Cunha administrators, who have come and gone for many decades, the priests who serve in the Anglican church are also temporary residents. The interesting circumstance is that three of the Anglican priests have come from the same town, Malvern, located in Worcestershire, in the West Midlands region of central England. Last Friday, the Malvern Gazette, a newspaper in the town of slightly under 30,000 people, carried a story about the odd link between the English town, its church people, and the distant outpost of empire.

The first Anglican priest from Malvern to serve on Tristan, Edwin H. Dodgson, younger brother of the famous writer Charles L. Dodgson (who was better known by his pen name, Lewis Carroll), served on the isolated island beginning in February 1881. He landed safely, but shortly after he got ashore, a gale came up and drove the ship onto the rocks, destroying most of the paraphernalia he had brought along. Communion vessels and a stone font were saved, but not much else.

He served as school teacher as well as priest, and at first he was optimistic. But he soon became quite depressed about the situation—particularly the isolation of the Tristan Islanders and their lack of education. He felt the isolation stunted their intellectual growth. He urged that the people be removed from the island, for their own good, but the British government ignored his recommendations. He left early in 1885.

Later that year, however, 15 men drowned at sea in a boating accident that decimated the adult, male population of the island. Hearing the news, Dodgson returned to Tristan in August 1886 to help out, staying until December 1889, when poor health forced him to leave for good.

The island was without a priest until 1906 when John Graham Barrow, also from Malvern, arrived. The landing party was again hampered by mountainous seas, but the new priest was able to bring ashore a church bell, donated by the parishioners in St. Andrews church in Poolbrook, his former parish. Poolbrook is a suburb of Malvern. He served on Tristan until 1909.

Other Anglican priests have come and gone. One, described by Peter A. Munch in his book Crisis in Utopia (1971), acted in an imperious, dictatorial fashion toward the islanders. The islanders handled him by deferring to his wishes as much as necessary and nonviolently resisting whatever they could, without directly confronting him.

The third Malvern man to serve as parish priest on Tristan, Father Brown, was much more exhilarated by his isolated post than his predecessors. At first it all seemed to be very bleak and dreary, he told the news reporter, but after he met some of the islanders he quickly changed his mind.

He said he found the community to be a friendly, though reserved, place. With just 261 residents, everyone knows each other. It retains, in Brown’s estimation, the atmosphere of rural Britain in the 1950s. Wool being one of their major crops, the bearded priest was given a pile of knit goods when he left.

A news story on the Tristan da Cunha official website includes five pictures of Father Brown at a party a few days before he left, with parishioners wishing him well.