While the Buid have traditionally relied on rituals for help in maintaining harmony in their families and communities, they will also turn to them when they are threatened by outsiders, such as the Christian lowlanders who are taking away their lands.

Recent news stories about the land conflicts do not report any violence, though tensions are obviously running high in the Buid communities of southern Mindoro Island, the Philippines. The Buid have farmed the highlands in the region for many generations, and are protesting the way their ancestral lands are being deeded to non-Buid farmers. The process of taking away Buid lands started some years ago, and it has resumed, with government support, in the past few weeks.

In 2004, the Department of Agrarian Reform in Oriental Mindoro province started distributing titles to some 600 hectares of Buid (also spelled Buhid) ancestral lands to non-Buid lowlanders. The titles were given to over 200 non-Buid farmers as part of the Comprehensive Agrarian Reform Program. However, due to an insurgency in the region at the time, the government did not continue the program until a few weeks ago when it resumed distributing the titles.

A reporter, Madonna Virola, contacted the provincial government of Oriental Mindoro to obtain the background. Rene Catly, in the agrarian reform office, described how the agency had deeded the Buid lands to non-Buid farmers in 2004. The properties had been declared disposable for agrarian purposes by the Ministry of Human Settlements.

Yaum Sumbad, leader of a group called Sadik Habanan Buhid, told the reporter, “Our sacred lands were measured and are being taken away. We fear sickness, calamities, death. We ask for the protection of our land.” 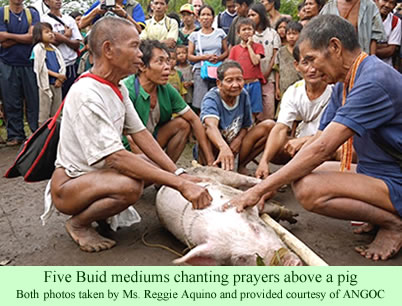 Ms. Virola visited the town of Bongabong and witnessed a Buid ritual called a Luhudan. Five mediums chanted prayers above a pig, she writes, which had been tied to a piece of wood. They were appealing to the ancestors for help in driving away the evil spirits, which they felt were trying to take their land away from them. If she witnessed the full ritual, she doesn’t describe the sacrifice of the pig or the distribution of the meat.

Gibson (1989b) indicates that pig feasts were often held in Buid villages when he was there in order to resolve internal disputes, particularly marital problems. The ritual of sacrificing pigs and distributing the meat to others followed traditional rules designed to restore and reaffirm harmony within the household and the community. 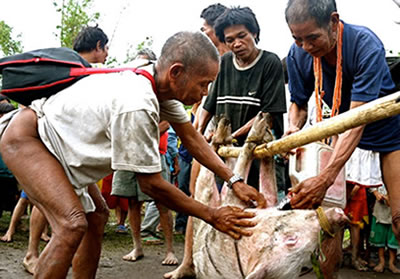 In another work, Gibson (1989) describes additional reasons for pig feasts. Though the animals that are sacrificed all belong to individual households, the meat is always shared equally in the community. The circumstances that prompt the ceremonies may vary, but the rituals are only held because of a mystical danger of illness or death. The larger the apparent threat, the greater the community of participants. Gibson briefly describes, in his 1986 book (p.172), what he calls the “swinging-pig ritual,” which serves to expel invading spirits “through the violent release of animal vitality.”

Gibson worked in the hamlet of Ayfay, located within the same Bongabong municipality that Ms. Virola visited. In the course of his work there, from 1979 to 1981, he helped the Buid prepare a map of their traditional holdings, in order to assist them in the land conflicts that had been building up for years. He writes (1989b, p.73) that while the Buid community realized the importance of settling conflicts through appropriate rituals, “internal squabbles continue to be dwarfed in importance by the threat posed to all Buid by lowland squatters and capitalists.”

Some of the Buid today are taking active positions. Inggid Ray-Uman, from the Maptung community, claims that the government is violating the Indigenous People’s Rights law. The land is not disposable, he says. He argues that the government has not obtained the informed consent of the Buid to being dispossessed of their lands, and he says they have submitted several petitions about the matter.

The non-tribal Filipinos disagree, needless to say. Robert Fabella, who attended the pig ritual, claimed that he was born in 1974 on land to which he now has title, over 2000 square meters, or a half acre. He said he had the land surveyed, obtained the title, and only afterwards did the Buid confront him with their claims that the land was theirs.

Maricel Tolentino, from the Asian NGO Coalition for Agrarian Reform and Rural Development (ANGOC), is trying to forge a compromise. She maintains that both the Buid and the non-tribal farmers are very poor, and both are trying to use the same land. Her group is fostering dialogs between the competing interests and the provincial agencies in order to bridge the differences between the differing perspectives on property rights.

Mr. Catly in the Department of Agrarian Reform is defensive. “We can’t cancel all titles we awarded on over 900 hectares,” he tells Ms. Virola. “But the tribal people’s claimed land is over 99,000 hectares. There has to be a win-win situation.”

Congressman Teddy Baguilat, who chairs the committee on cultural minorities for the national government, is optimistic that the problem of tribal rights versus settler claims for lands can be settled. Himself a member of the Ifugao society in northern Philippines, Mr. Baguilat sees the dispute in terms of bureaucratic tangles because so many different agencies have been involved and have differed over the right ways to settle land rights. Part of the problem, he feels, is that the agencies have not effectively negotiated their differences for the best interests of all.

He believes that if the government can properly solve the Buid case, that could set a precedent for traditional land title claims all over the Philippines. His committee has received many complaints from indigenous groups about this problem. The issues are often quite similar to the Buid dispute. If his rosy perspective fosters real leadership about the matter, the reporter speculates that the Buid may not need to continue their sacrificial rituals.