While a tourist facility in the sacred Dzongu reserve of North Sikkim has just gotten a blessing from a foreign royal party, it is not clear how increased tourism will affect the lives of the local Lepcha villagers. 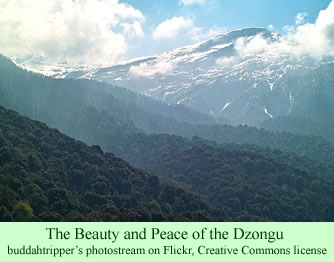 A news story last week indicated that Crown Prince Haakon of Norway, his wife Crown Princess Mette-Marit, and their two children had spent three days in Sikkim at a home that has been opened for tourists in the village of Passindang, in Dzongu. According to Sonam Norgay Lachungpa, the owner of Galaxy Tours and Travels, which conducted the Norwegians, “the royal family was delighted with the beauty and peace of the place.” The Crown Prince said that they plan to return next year with a larger entourage.

Gyatso Lepcha, who runs the establishment where the royal family and their six bodyguards stayed, said that they simply wanted to enjoy the beauty and natural surroundings by taking short treks and going to the Teesta River. They were also interested in local culture, he said.

Another tourist in Passindang, Martin Koskin from Sydney, said he was spending five days there. “Dzongu is very peaceful and completely different from other hilly areas,” he said. “The people here are very hospitable and friendly.”

Mr. Lachungpa, who is also the general secretary of the Travel Agents’ Association of Sikkim (TAAS), an organization of travel and tourism operators in the state, has been promoting the idea of local villages in Dzongu opening small tourist facilities for high-end visitors. He emphasizes that they should focus on the Lepcha culture and the peaceful beauty of the area. Several members of TAAS toured existing facilities in Dzongu last week.

Lukendra Rasaily, the deputy director of the state tourism department, said that it was important for tourists to not see concrete structures. The tourist promoters are emphasizing Dzongu precisely because it has not been modernized. “We want to develop tourism here according to the local lifestyle,” Rasaily said. It is an ideal destination because of its simple beauty and lack of modern structures.

Mr. Lachungpa requested the Lepcha to refrain from erecting concrete buildings. “Tourists don’t want to see massive structures or modern lifestyle[s],” he said. “They are more interested in enjoying village life with the local community.” The newspaper article did not address the long-term possible consequences to the Lepchas themselves from willfully turning their villages into museum displays so they would appeal more to upscale international tourists.