Although medicine and peacefulness are quite separate issues for most of the world, in some small-scale societies, such as the Paliyan, traditional healers and botanical preparations still help maintain physical, cultural, and social health. A detailed article describing the healing plants used in some Paliyan villages of Tamil Nadu, in southern India, provides some interesting insights into their medicinal beliefs. 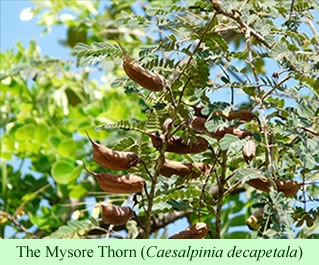 The authors, J. Karunyal Samuel and B. Andrews, from the Department of Botany at the American College in Madurai, Tamil Nadu, were able to earn the trust of the residents in Pachalur and Periyur villages, Dindigul District of Tamil Nadu state. Paliyans live in some of the hamlets in those two villages. As a result of their field work, the authors were able to catalog 82 different plants and describe the uses the people make of them.

For instance, Caesalpinia decapetala, known as Mysore thorn, Mauritius thorn, or cat’s claw, is a modest-sized, evergreen, tropical thorn shrub that originated in India and has spread in the tropics worldwide. It has been introduced in many locations, where it spreads through seed dispersal and branch tip rooting. An aggressive, invasive plant, it forms dense, impenetrable thorn shrub barriers. The Paliyan, however, appreciate the fact that they can make a paste from the leaves to treat fevers.

Many familiar plants that are listed in the catalog are interesting due to their uses by the Paliyan and the other rural inhabitants in those hamlets. Allium cepa, the common onion, is used by the indigenous village peoples for sore throats: the bulb is peeled and chewed. The boiled bulbs of Allium sativum, garlic, are taken at night for high blood pressure. Aloe vera, a well-known succulent plant, is used to treat infertility and baldness. A pulp from the leaves is applied overnight to bald heads. The article does not indicate how well it works. 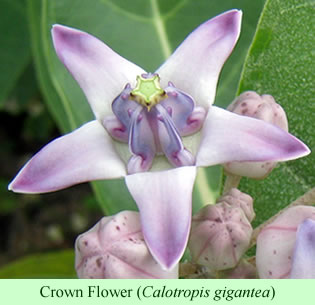 The Paliyan use Calotropis gigantea, the crown flower, a tropical shrub with spectacular blossoms, for inflammations. They apply a paste from the plant on affected areas overnight. The plant is commonly found in temple compounds in India, where it is known as Madar. It was supposedly strung into leis and worn by Queen Liliuokalani of Hawaii as a symbol of her royalty.

While the medicinal uses for plants have normally been kept secret by local healers and passed along within families, the authors found that, once they got to know the residents of the hamlets, the people were quite forthcoming about their traditional knowledge. The tribal peoples became eager to provide information about plant uses to the study group.

Samuel and Andrews point out that, for the most part, the villagers still use the medicinal plants daily for health purposes. Many of the plants are either found commonly in the areas surrounding the villages or in deeper forest environments, though some are rare.

The authors did note that younger tribal people show less interest in the healing plants than their elders do. Also, alarmingly, the young showed less concern about preserving the biodiversity and the traditional knowledge of their communities. Perhaps they are immersed in the wonders of the outside world through the technical devices in an information center opened in Pachalur in 2007.

A newspaper article about the new information center indicated that it included six computers, mobile and landline telephone services, radio, television, and multimedia facilities. The community is running the facility as a business, hoping, according to the newspaper, “to make available the benefits of new technology, particularly information and communication, to the poor and downtrodden.”

The new center provides such basic information as marketing news for farmers and local businesses. The article by Samuel and Andrews on local traditional botanical medicines in Tamil Nadu is available as a PDF on the Web, so the young Paliyans, even if they don’t learn from their elders, can still read about their traditions on their community computers.