Philippine soldiers are harassing the Buid and the other Mangyan villagers, according to a series of news reports last week, but the indigenous mountain peoples are reacting by reciting their peaceful poetry, called ambahan, to assert their unity and sense of determination. 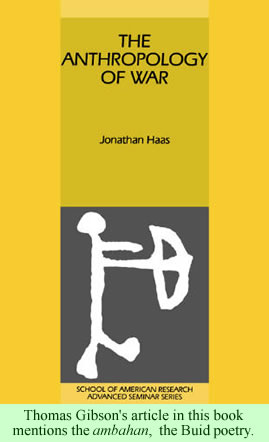 Out of the seven (or some sources say eight) Mangyan societies that survive in the mountainous interior of Mindoro in the Philippines, two, the Buid and the Hanunoo in the southern end of the island, still use an ancient written script to help preserve their poetry. According to Thomas Gibson’s article in the 1990 book The Anthropology of War, edited by Jonathan Haas, the primary purpose of the script is to preserve poetry, which is often used by young Buid men to court young women. Instead of trying to conquer women through force and violence, the Buid recite love poems to try to win their favor.

A 1981 book by Antoon Postma describes the uses of the poetry among the Buid as well as the Hanunoo. These two societies speak mutually unintelligible languages, but to some extent both groups understand the same words of the formal, stylized poetry. While the other Mangyan groups farther to the north do not preserve writing systems, they also recite ambahans, much as the Buid and the Hanunoo do, for such purposes as expressing ideas, describing feelings, forming harmonious relationships—and making love. Parents may use the poems to educate their children; visitors may use them to gently ask for food; and relatives may recite ambahans to say goodbye after a visit.

Of course, the Buid do not say everything poetically. A man coming home from working in his fields would not use an ambahan to express his hunger to his wife. As Postma writes, “he will express the feeling of his stomach in plain and clear language.” But he will use the ambahan on special occasions when he needs to say unpleasant, delicate, or embarrassing, things. A boy might use plain language to express his love for a girl—that he will love her forever—but it will sound much better if he can say so with an ambahan. Many examples of the poems are reprinted on the website of the Mangyan Heritage Center.

All of this made the news last week in a series of four articles published by the Philippine alternative news magazine Bulatlat.com. The first in the series of four, an overview, was titled “A Difficult Life for Mangyans.” The second concentrates on the mining industry, which is threatening human lives in the mountains. The third article describes the ways soldiers are terrorizing the people, while a fourth summarizes the series. The four articles suggest that there is some hope for the Mangyan peoples because of their growing feelings of having a common cause. Their newly forming sense of unity, and the organizations they are establishing, may give them the power to achieve their rights.

Pastor Marcelo Carculan, chair of the group Hagibbat, an acronym based on the names of the seven indigenous societies and himself a Mangyan, describes the discrimination he and the other members of his village have experienced from Filipinos. For instance, an outside organization, San Miguel Corp, offered the people of his village P150 (US$3.50) per kilo for cassava roots, but in the end they only paid them P1.50 per kilo.

On April 15 and 16, the articles point out, 500 people from all seven Mangyan societies gathered to celebrate Mangyan Day, hosted by Pastor Carculan in his village, Abra de Ilog, at the northern tip of Mindoro. While representatives spoke seven different languages and came from seven different cultures, they were united in their opposition to the loss of their lands—and united in their determination to defend their rights.

The representatives gathered together, chewed betel nuts, and shared their ritualistic ambahans as symbols of their unity. A blog post from July 2009 indicates that reciting stories poetically remains an important aspect of life in the Mangyan villages. But the uses of the poems are changing. To some extent, the traditional content of the ambahan is giving way to newer ideas and concerns—problems with soldiers, mining, logging, the loss of lands, the destruction of forests. But the older uses also remain important.

One person at the Mangyan Day celebration explained his ambahan song: “We, Mangyans avoid problems but now, it cannot be avoided. The only solution is unity.” A Buid representative sang—the poets chant their thoughts—about the importance of fighting a dam, while a representative from another group indicated, in his ambahan, how the people plan to defend their lands.

The representatives did more than recite poetry. They prepared and signed a Mangyan Declaration, a statement opposing proposed mining operations. The declaration named government officials whom the people feel are guilty of discriminating against them. It called for an end to aggressive development projects, and it requested the repeal of laws that permit the desecration and expropriation of their lands. According to Pastor Carculan, “mining and other projects divide us, like the fingers in our hands. It is only when we clench our fist that we would be able to win against threats to our existence.”

But government officials are aware of the threat posed by popular organizations. Five days before the planned Mangyan Day, soldiers visited Marcelo Carculan to ask about Hagibbat and the upcoming activities. On April 15th, they carried through. A truckload of soldiers from the 80th Infantry Battalion of the Philippine Army arrived at 7:00 AM, brandishing their high powered rifles in front of the growing crowd.

Some attendees were intimidated, as the soldiers had doubtless intended, and simply melted away to avoid any confrontations. But many stayed, discussed their issues, and wrote their declaration expressing their newly found unity.

The four Bulatlat.com articles, about 4,500 words, provide a lot of details about the problems all the Mangyan societies are enduring. The third article relates stories about soldiers intimidating villagers, including some nasty incidents in a Buid community. The second gives background about the ways government elites are expropriating Mangyan lands and selling off the mining and drilling rights to large international corporations. Power dams threaten Buid communities. Throughout the series, the reader is confronted with depressing stories about Mangyan villagers experiencing discrimination from the lowland, Christian, Filipino peoples. But the Buid, and the other Mangyans, are relying on their traditions to help them build hope for a just and peaceful future.