Last week, the Prime Minister of India, Manmohan Singh, removed Jairam Ramesh, India’s Minister of Environment and Forests, from his position. Recent news reports had celebrated the decision of Mr. Ramesh to preserve the last remaining stretches of the free-flowing Chalakudy River in India’s Kerala State from a dam project. His decision had appeared to save a Kadar village and a critically important natural ecosystem from destruction. 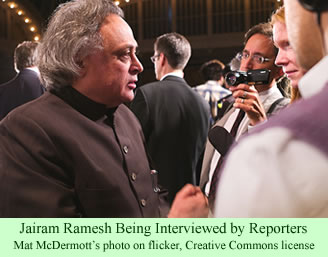 The cautious optimism may have been premature. The MOEF administrator had made his decision to preserve the endangered riverine ecosystem, and the village of tribal people, despite the wishes of bureaucracy and pro-development forces in Kerala.

On Tuesday, the Prime Minister moved Ramesh up to a cabinet level position to head the rural development ministry with senior minister rank. He appointed Ms. Jayanti Natarajan, a lawyer, member of parliament, and spokesperson for the Congress Party to replace Ramesh. Neither individual was available to the press for interviews during the week.

People representing environmental and human rights agendas are upset, though the qualities that Ms. Natarajan will bring to the MOEF are of course unknown at this point. Business interests are celebrating the removal of a bureaucrat who, at times, took his job—of preserving the natural environment—seriously. He was a controversial figure for standing up, on more than one occasion, for more than just the needs of business.

Ramesh graduated from the Indian Institute of Technology, Carnegie Mellon University, and the Massachusetts Institute of Technology. When he was appointed to head MOEF in 2009, he proceeded to transform an obscure ministry that most people had never heard of, a virtual rubber stamp for industry, into a force that tried to balance development interests with environmental and basic human needs. He was often criticized from all sides—the fate of a conscientious official, perhaps.

The controversy over the Chalakudy River and the Athirappilly Falls project in Kerala was minor in the greater scheme of Indian politics. Ramesh had the temerity to question huge industrial projects, such as the permit for a 12 billion dollar steel works which had been awarded to a South Korean firm. He also questioned the development of a huge bauxite mining works and a mega-nuclear power plant—the world’s largest—because they violated existing Indian laws. He approved many large projects, over the protests of Greens, but he persisted in also trying to represent the interests of India’s bio-diverse ecosystems and forest tribal communities.

Ramesh commented, during a debate in May this year, that “ India needs to be liberated both from the ‘high GDP growth hedgehogs’ and the ‘conservation at all costs hedgehogs.’” He said that what the country needs is to balance high growth with conservation.

But he had an outspoken manner that irritated his government colleagues. He didn’t mind telling things as he saw them. At an April meeting, he told an audience, which included his boss, that adding 100,000 megawatts of power to India’s electrical grid over the next five years was ecologically impossible. Confronting the growth-at-any-cost mentality was not popular.

Why was he so outspoken in favor of the environment? Perhaps he believed he should follow India’s laws. It’s hard to know. On one occasion, he told a meeting, “If there is a Nobel prize for dirt and filth, India will win it, no doubt.” But he did compromise. He ultimately yielded and permitted coal and nuclear power plants, a new airport for Mumbai, and so on.

His undoing may have been his opposition to major coal mining projects in central and eastern India. Apparently some 660 million tons of coal that could be mined fell into areas he had decided should be preserved for their forest and human values. A huge, proposed mine in a forested section of central India, in the state of Madhya Pradesh, which he vetoed, prompted industrialists to appeal to the Prime Minister. That may have been the issue that led to his downfall.

Reactions from environmentalists range from muted—no one knows what the new minister will do—to outraged. Valmik Thapar, a prominent tiger conservationists, said that Mr. Ramesh had worked hard, learned a lot, and raised the profile of the ministry. Koshor Rithe, a member of the National Board for Wild Life, said that he had done the best he could do, considering the pro-growth at all costs mentality of India. Other environmental leaders expressed caution since no one knows what the next minister will do.

The Wall Street Journal was ecstatic, predictably. “A potentially positive sign for businesses frustrated by regulatory obstacles,” the WSJ commented Wednesday about the change in India. Mr. Ramesh had “held up several major industrial projects that many viewed as vital to India’s economic development,” the paper opined. Development at any cost.

The Journal referred to the removal of Ramesh as a good sign for business in India, since he had become an impediment to major projects. B. G. Verghese, a political analyst, told the paper that “he had come to symbolize an attitude of ‘no’” in the government. The paper said that while Ramesh may have been “a hero among environmentalists,” he was “reviled in corporate circles where he was viewed as arbitrary and unfair.” His fault: he questioned some projects that had previously been approved, the paper charged, quite correctly.

The paper may have been referring to the Athirappilly project and the deposed minister’s having taken a personal concern for the Kadar village and the rich, forested, mountainous environment of Kerala. Ramesh recently set up a panel to further consider the evidence relating to a range of proposed projects, including the Chalakudy Dam, and their impacts on critical forest and indigenous communities in the Western Ghats region of southwestern India. That area is widely recognized as one of the world’s major biodiversity hotspots.

It is not clear whether the new minister, Jayanthi Natarajan, will be interested in the upcoming report from the panel. Will she continue her predecessor’s concern for the human and natural impacts of development projects? Will she, on occasion, buck industrial interests in order to preserve human and natural values? Mr. Ramesh has set a high standard for anyone to follow.