Fernanda Pirie, in her penetrating book Peace and Conflict in Ladakh, describes the way the Ladakhi effectively resolve their disputes. The question is whether their peacemaking skills can survive propaganda from the Indian Army that the way to solve problems is through military might. 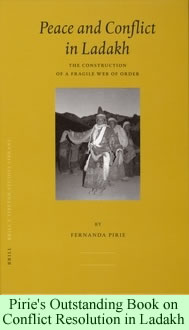 The Indian Army is again promoting itself to the Ladakhi people, this time with a fair to showcase their latest security equipment and weaponry. Because Ladakh is near the Pakistan and China borders, with both of which India has fought wars in the past 65 years, India maintains a very large military presence there.

The Indian army hosted a light and sound show at an old fort in Leh a few years ago to promote the idea that Ladakh has a glorious military heritage. More recently, a journal article described the army’s good works, its Operation Sadbhavana, in the remote Ladakhi villages. And earlier this year, the huge numbers of army personnel in the district skewed the decennial census figures, causing a furor in the Indian press.

The “Know Your Army” exhibition last week, opened by Rigzin Spalbar, Chief Executive Councilor of the Ladakh Autonomous Hill Development Council, Leh, gave visitors the chance to see weapons which army personnel had captured from militants during their various raids in the region.

General Ravi Dastana, the commanding army officer, said, “we want to reach out to the people and tell them that we love the people of Ladakh and we really want to salute them.” He went on to say that the army presence is for the people of Ladakh, and he invited the Ladakhi people to join the army.

The army admitted that the twin purposes of the fair were to foster an awareness of the role of defense forces in the region, and to promote career opportunities in the armed forces. Visitors not only got to see armored vehicles, but some were even allowed to take rides on them.

Mr. Spalbar expressed enthusiasm for what he had seen at the fair. “Whatever we have seen today, we really feel proud that the soldiers of the Indian Army work so hard to ensure the security of the people. Women and children of all age groups have come here to visit this fair and learn about the Indian army. There is so much enthusiasm among the people,” he said.

Neither General Dastana nor Chief Executive Councilor Spalbar was quoted as expressing any concern about the traditional peacefulness of the Ladakhi villages. The news reports did not indicate if such issues were even mentioned by the army at the exhibition.