Through the lens of a skilled photographer, the Batek people, particularly their children, appear to radiate charm, beauty, and peacefulness. A couple of photo-filled blog posts by Lye Tuck-Po this past week, one on Monday July 25th and the other on Sunday the 31st, certainly capture the inner beauty of these people. 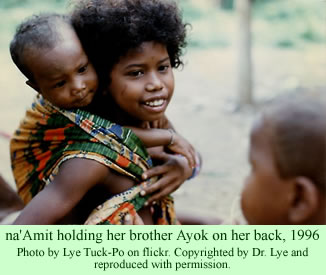 Dr. Lye’s blog post on Sunday, entitled “Batek Portraits: Then and Now,” shows pictures of people as they appeared in 1996 while she was completing her dissertation field work among them. Paired next to those photos are pictures of the same individuals taken 15 years later, during a return visit in 2010.

Among the charming pairs of pictures are two of Ayok and his older sister na’Amit. The one from 1996 shows him as a baby being carried on his sister’s back. In the 2010 photo, Ayok, then a teenager, stands next to his sister, who is now married and carries her own baby on her hip. In an earlier post, on Nov. 3, 2010, Lye indicates that na’Amit has four children of her own. 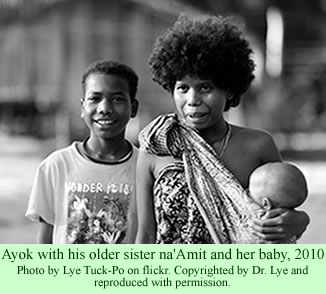 In that November post, Lye says that she feels these two are really her own family. She first met na’Amit when she was a girl of seven or eight. A bright, imaginative child, the girl and the anthropologist quickly became friends. They caught up with one another each time Lye returned to visit their village at Taman Nagara National Park.

Similarly, Dr. Lye has known Ayok since he was a baby, and she has seen him again when he was three, nine, and in 2010, when he was 15. She writes that last year she wanted to acknowledge with him that they had shared special bonds when he was younger, but that such an admission might have been awkward, at least for him. He may have felt the same way. He solved the difficulty by bringing some of his teenage friends to her house for a sleepover the last night of her 2010 visit. 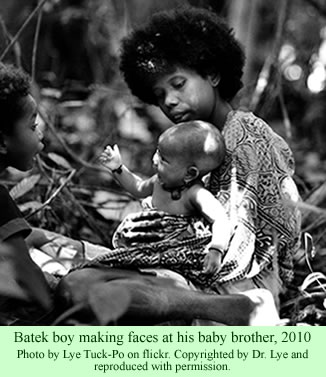 On July 25th, Lye posted six black and white photos of Batek children doing various things. One, a shot of a mother holding on her lap her infant son, who is making faces at his older brother sitting nearby, captures the harmonious family spirit of the Batek.

She refers, in that post, to the 1928 book Among the Forest Dwarfs of Malaya by the German anthropologist Paul Schebesta. He described the Batek as “dwarfs,” a characterization that she disputes. But his statement about the Batek, which she quotes, is interesting.

“Fathers and mothers are very devoted to their children,” Schebesta wrote. “I have often seen, with astonishment and pleasure, how tenderly the dwarf mothers kiss their children, dangle them on their knees, and prattle to them, laughing…one often saw fathers caressing their children.”

Dr. Lye clearly agrees with Schebesta’s description of Batek family life. It is easy to understand why the anthropologist takes time out from her work to go back again and again to visit these people.