Birhor women are experts in the use of native plants for contraceptive purposes, according to a news story last week in The Pioneer, an English language daily paper from India. In one of three stories about the Birhor carried by the paper during the course of the week, Ashis Sinha wrote that the Birhor avidly continue to use plants for medical purposes. 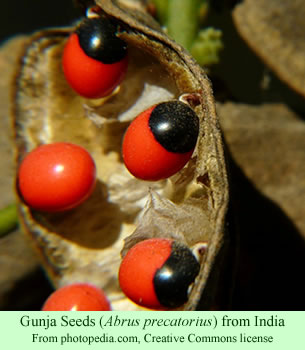 Karmi Birhorin, from the hamlet of Demotand, told the reporter that she uses one gram of powered gunja seed, boiled in milk for 30 minutes as a contraceptive. About 200 ml of the mixture, taken twice daily during her menstrual cycle, seems to work for her. The gunja is a legume that is native to India. She also advocates the use of unripe custard apples, taken with warm water, as another possible contraceptive.

Sukar Birhor, from Chalkari village, indicated that the Semal flower can be boiled with black pepper to form a mixture which, if taken orally, prevents pregnancies. In addition, Sukar suggested that petals from the palash flower, if boiled in cow’s milk for an hour and then taken three times daily during the menstrual cycle, will also act as a contraceptive. If pomegranates are boiled in water and taken orally, they too have anti-fertility properties.

Sushma Birhorin from Kalichattan said that she cooks the bark from the roots of male papaya plants, along with catfish, to concoct a mixture that will inhibit pregnancies. To restore fertility, she added, “we carry out the same procedure but with the female papaya plant.”

According to Mr. Sinha, the Birhor use parts from other plants to treat colds, skin infections, sexually transmitted diseases, and gastrointestinal ailments. Dr. P.K. Mishra, head of the botany department at the Vinoba Bhave University in Jharkhand, speculated that the potions may work as contraceptives by causing the woman’s body to rapidly expel fertilized ova from the fallopian tubes, by disturbing estrogen balances, or perhaps by causing fetal abortions. Whatever the effects of the plant preparations may be, he suggests that a huge business might be created by developing those plant properties commercially.

The journalist, Mr. Sinha, suggests that the basic Birhor understanding of plant uses needs to be documented before they modernize and abandon their traditional knowledge. Their uses of herbs, for instance, is unknown outside their own culture. He urges government agencies to help preserve Birhor traditional knowledge.

In another story he wrote for The Pioneer last week, Sinha had a less positive impression of Birhor traditions. “It is astounding,” the said, “how the Birhors keep moving from one place to another in search of foods and survive by eating roots, fruits, flowers, leafy vegetables, mushroom and leaves from the forests even in the 21st century.” Perhaps he has not read Gandhi’s autobiography, where he wrote about the way he developed his own diet consisting exclusively of fruits and nuts. The major difference was that the Mahatma didn’t gather the vegetable foods from the forests.

The point of that story was to report that 12 Birhor families in Jharkhand were going to be receiving new homes. About 125 Birhor families still live in traditional dwellings made of branches and leaves which are assembled into cone shaped huts. Dashmi Birhorin was quoted by the reporter as complaining how they “are facing a tough time and have always undergone lot of problems. Life has always been tough and unfair to us,” she said.

A third news report, also by Ashis Sinha, discussed efforts to develop effective uses of cell phones by the Birhor. Babulal Birhor and Somra Birhor, from Dohakatu, told the reporter that cell phones allow them to do various tasks quite effectively. The phones help families keep in touch while some of them are away working at jobs elsewhere, they said. They can be recharged in the villages with solar power. A cell phone is evidently as cheap to purchase as a goat, and its use does not necessarily interfere with their traditional ways.

Shubhranshu Choudhary, a journalist, developed in Chhattisgarh state a cellular network that allows indigenous people to share information and pool it through professional reporters who then feed it back via cell phones to the whole network of villages. Most villages have at least one cell phone. Activists can thus push for changes and be heard widely. The closing of two health centers in the state was reversed after enough participants in the cell networks complained. One of the health centers was reopened.

Cell network enthusiasts look for inspiration at the example of the Maasai people of Kenya. They have been able to share information about the existence of good forage conditions for their herds, saving them from roaming hundreds of miles randomly to find better conditions. They use their phones to seek medical help and to trade or sell their cattle.