Birhor women have traditionally collected the leaves from saal trees in northeastern India to use as dinner plates for their families, but they have recently been trained to also fabricate them into commercial products. Ratan Kumar, the Deputy Commissioner for the Lohardaga District of Jharkhand state, is taking credit for initiating the training project among a group of 25 Birhor women. 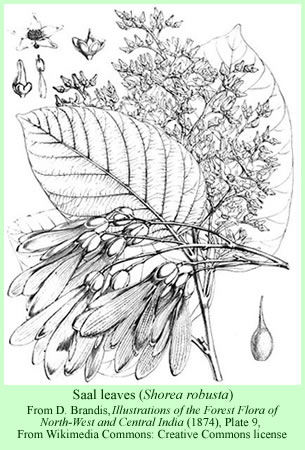 The leaves, taken from Shorea robustax, the saal tree—a member of the Dipterocarp family—have a long history of being used as plates for eating foods in northern and northeastern India. After being used as dinner plates, according to an article in the Wikipedia, the leaves are then fed to goats and cattle. The article adds that their use by rural people helps prevent the accumulation of litter from non-reusable Styrofoam and plastic plates.

Kumar persuaded the National Bank for Agriculture and Rural Development (NABARD), plus an NGO that is active in northeast India, the Chhotanagpur Craft and Development Society, to support his project. He wanted to train the Birhor women at the village of Semardih, in the Kisko block of his district, how to fabricate plates and bowls out of the forest leaves, and then how to market them. Mr. Kumar was encouraged when “the women of the primitive tribe had showed a great interest of doing something in my first interaction with them one month ago,” so he decided to move ahead with the project.

The Birhor women have traditionally gathered the saal leaves in the forest anyway, so the prospect of developing their normal occupation into a viable business had immediate appeal. The official admitted that previous projects in the village had failed because development planners had not considered the fact that the women would need careful training, and that machines run by electricity would not work in a village without any electrical power.

This time, the planners claim they have been more careful. The machines used for fabricating the plates are powered by firewood, and the training period for the women has been for 15 days, rather than the one day offered in an earlier project.

The Deputy Commissioner added that a variety of other district officials are being encouraged to pay special attention to the needs of the Birhor. Doctors have been asked to undertake monthly health checkups in the community. People have been given blankets. A community hall, long neglected, has been completed. Some individuals have been given ration cards, and medicated mosquito nets are expected to be provided to the villagers shortly.