A South Dakota Hutterite colony is planning to split in half and establish another one in North Dakota, but as sometimes happens, there has been opposition in the rural area where they plan to build the new one. The Bohnsack Township Board, in Traill County, ND, held a hearing about the application by the Millbrook Colony, located near Mitchell, SD, to build the new development, which will be called the Spruce Lane Colony. The township board approved the application. 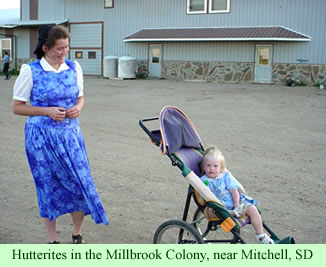 About 20 people were in attendance, a large crowd for a rural North Dakota township meeting, but an earlier session, on November 17th, had attracted 120. They evidently came from all over the county, attracted by the controversy over the Hutterite plans for the land they have purchased. The newspaper article about the controversy did not indicate if any of the North Dakota residents had traveled the 250 miles south to actually visit the existing Millbrook Colony and see for themselves what the people, and the colony, are like.

The opponents of the Hutterite colony, calling themselves “Residents for a Greener Traill,” hired a lawyer to represent them at the hearings. Attorney Jade Rosenfels told the township meeting that their opposition has nothing to do with the applicants themselves. The opponents are only concerned about the planned uses of the land. They say they want to preserve the rural character of the area.

Mike Waldner, project leader for the new Spruce Lane Colony, indicated that it is quite common for Hutterite colonies to split when their populations become too large. Colonies typically own around 4,000 acres and have at maximum about 20 families. He told the meeting that that amounts to about 200 acres per family. “So, we’re not land robbers,” he said. He added that they have already purchased 2,100 acres in North Dakota for the new colony.

The Hutterites plan to build an 80,000 square foot manufacturing plant on their property to build grain handling equipment, especially conveyors. They will also build residences for themselves, a dining hall, a church, a school, and a barn for chickens and ducks. Their farming operation will include corn, beans, and wheat.

Area residents are concerned about the planned sewage lagoon, which will be only an eighth of a mile from Elm River. They also worry about pollution from the manufacturing plant. Also, some people have been opposed because of a misunderstanding that the Hutterites would not pay taxes, which is not true.

John Henn, the township chairman, said that the colony had met all zoning requirements, so the board had no other choice than to approve the application. “But I think this is a good thing..” he said. “They’ll be good neighbors. And their tax dollars will go to the school district.”

Mr. Waldener, the Hutterite leader, spoke in a conciliatory fashion. “Their concerns are very understandable,” he said. “With every new colony, there are always concerns. It’s just hard for people to accept change. It’s a big change for this area.”