The Wall Street Journal’s “India Real Time” blog is publishing a series of six investigative reports on starvation in India, one of which, last week, described the terrible mass deaths of October 2008 in a Birhor village. That tragic episode prompted a flood of attention for the formerly obscure tribal group, and the news media in India have been covering the Birhor very attentively ever since. 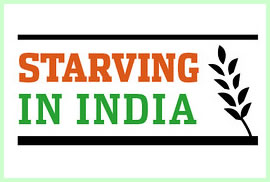 Last November, Ashwin Parulkar and a colleague from the Centre for Equity Studies, a New Delhi think tank, visited the small Birhor village of Hindiyankalan, in the Chatra district of Jharkhand state, to interview the residents and find out what had really happened three and a half years ago. Is there starvation in the village? What are government agencies doing to alleviate their problems? His report, the third in the “Starving in India” series, seeks to address those questions.

The tragedy broke in early October that year. Eight Birhor had died of mysterious causes the same night, apparently from food poisoning. The name of the village was spelled “Hindiyakala” in the news stories of 2008. Some sources blamed the Birhor themselves for eating poisonous roots, while others blamed government agencies for their failures to provide proper rations to starving people. The report last week finally clears up the circumstances of the tragedy.

The reporters spoke with a 65-year old widow, Sahria Devi, about what had happened. She explained that the story goes back long before the events of three and a half years ago. Despite meeting the legal requirements for extreme poverty under Indian law, the villagers had been unable to get ration cards that would have allowed them to have access to supplemental foods.

An independent investigation found that only four cards had been issued to the villagers since 2000. Furthermore, the grain shop dealer who was supposed to be distributing the food grains was selling them instead and falsifying records. “My family was starving,” Ms. Devi explained to the visitors, a crowd of curious villagers gathering around.

While they used to subsist on fabricating products such as ropes to sell from materials gathered in the nearby forests, that source of income is not nearly enough now. Ms. Devi, and other villagers, carve bamboo sticks into strips, out of which they make rice winnowing baskets called “soops.” She and her family could make two or three per day, which they could sell, in 2008, for seven rupees (US$0.14) each, not enough to feed the family of eight people. The villagers also collect and sell honey and other forest products as often as they can.

The family was entitled by law to a ration card but as often as Ms. Devi pleaded, she couldn’t get one. Other government food supplement programs were also not working. A Child Development Services center was supposed to be overseeing and guaranteeing that children under age six, adolescent girls, and pregnant women in the village would receive adequate nutrition. The village lacked such a center. A service providing supplemental foods to children—supposedly a mid-day meal daily—only operated when the school was open, two or three days per month.

Ms. Devi and the rest of her village survived as best they could on a bit of rice each day plus some chakora, a spinach-like vegetable, and the roots of a plant known as gethi. (A 2006 article on rural poverty in Jharkhand translated “gethi” as simply meaning “root,” and not the name of a particular plant.[1]) The problem is that gethi is poisonous. It needs to be soaked in water for 24 to 48 hours to leach out the toxins and become safe to eat. The villagers, that night on October 1, 2008, were too hungry to wait. About 20 people ate the raw roots and became desperately ill, suffering from severe diarrhea and vomiting.

The others tried to get help but couldn’t. The nearest hospital is only 13 km away, but they had no way to get the sick people there. Ms. Devi lost two of her grandchildren and a daughter in law. The news report last week describes the controversy that quickly developed about the case—the charges and counter charges, with different agencies blaming one another, and of course the Birhor themselves. The story last week settled the matter. The Birhor did die of poisoning, which was caused by their starvation. Both sides to the argument in 2008 were correct.

The update to the events of October 2008 is not as positive as one might hope. Officials claim to be concerned about starvation in the poor Birhor communities, but they seem to be unable, or unwilling, to do much about it. The reporters spoke with Ravinder Lal, a doctor at the nearest medical facility to the village. “There’s a lot of malnutrition here,” he told them, “but we’re from the medical side. We can only treat health problems.”

Dr. Lal was a member of a medical team that had visited Hindiyankalan and concluded that food poisoning had caused the deaths. One of the visitors told Dr. Lal that he too had visited the village shortly after the tragedy and he felt that severe malnutrition was the cause of the deaths. The reporters told the doctor that the people appeared to be starving, which would explain why they would eat poisonous roots.

They asked Dr. Lal if he would agree that the Birhor were receiving inadequate rations which might have caused them to poison themselves by eating the roots. “Perhaps,” Dr. Lal replied. “I am not willing to say. That is [the people’s] problem.” At least, he did not say it was the root of their problem.

The authors write that the tribal communities in India have less food than the other poor people in their country. While 45 percent of children under 5 years of age nationwide are under weight, the figure is 54 percent for tribal children. So-called “Primitive Tribal Groups,” such as the Birhor, are worse off than that.

As they sat chatting with a group of villagers in Hindiyankalan, the reporters reflected on what appears to be continuing confusion in government agencies as to what to do, and, even more troubling for them, “a general reluctance to acknowledge starvation deaths and address their primary causes.”