A leader of the Mangyan protests against a destructive nickel mining project in the mountains of Mindoro Island in the Philippines was awarded a Goldman Prize last week at a ceremony in San Francisco. For years, the Mangyan societies, which include the highly peaceful Buid (also spelled Buhid) on southern Mindoro Island, protested the dangers from a mine located along the mountainous spine of the island. 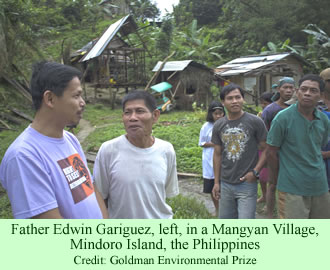 The prize winner, Fr. Edwin Gariguez, 49, is a Catholic priest who served as a pastor at the Mangyan Mission church on the island. He then became the executive secretary of the National Secretariat for Social Action, Justice and Peace. Gariguez was awarded the prize for his firm commitment to supporting the Mangyan societies in their efforts to protect the health of their environment and the sanctity of their traditions. “Mangyan” is a term used for the seven (some sources say eight) different indigenous peoples living on Mindoro.

Affectionately known as “Father Edu,” Gariguez helped found the Alliance Against Mining (ALAMIN), a coalition of the Mangyan peoples plus some administrators and other Mindoro residents who feared that the mining would destroy their water supplies. The proposed open-pit nickel mine, to be operated by the Norwegian mining company Intex, was being developed at the headwaters of four major river systems on Mindoro.

The mine used a potentially hazardous process known as acid leaching on the nickel ore. In addition to concerns about pollution of their water supplies, the Buid, and the other indigenous groups, were upset at the desecration of their burial grounds during the preparatory phases of the work. Despite the extensive opposition on Mindoro, the national government supported the development of the mine, since mining represents a lucrative source of revenue.

Father Gariguez was undeterred by harassment from mining company officials and military people—and by the murder of another anti-mining leader. As the grassroots movement against the mine grew stronger, local governments began supporting the anti-mine protesters. Father Gariguez traveled to Norway to address Intex shareholders and the Norwegian parliament. He also put pressure on his own national government to get officials to abide by the environmental laws that were already in place. He then filed a complaint with the OECD.

In 2009, he helped lead a lengthy hunger strike, which prompted the national Department of Environment and Natural Resources to finally investigate the environmental abuses of the mine and to suspend its operating permit. The setback for the company prompted it to attempt to sell the entire project in 2010. Father Edu has promised he will maintain pressure on the national government to make sure that any mining that is done will not harm water resources and will respect the wishes of the Mangyan peoples.

News reports in the Philippines showed pride and pleasure in his having been awarded the prize. A bishop in his church, Broderick Pabillo from Manila, said, “we are very happy that he got that significant international prize.” Pabillo went on to say that the award recognizes “what we are doing in Mindoro, protecting the indigenous people and protecting the environment especially against large-scale mining.”

Another person who is an activist along with Gariguez, Judy Pasimio, gave credit to the Catholic Church for its leadership in “ending the Mangyan’s struggle with Intex. This struggle is not just about protecting the environment, but is really about the survival of the Mangyans, which Father Edu and the church fought for,” she said. She added that he epitomizes the role of the activist, barefoot priest.

She said that he ignored advice to take rest breaks, and he insisted on taking public transportation to radio stations to do interviews during the hunger strike. She said the other leaders of the hunger strike urged him to rest since he was weak from the fasting, but he continued his commitments. He would not leave tasks for other people to do. She concluded that “seeing the Mangyans seemed to boost his energy.”

Father Gariguez, in his acceptance message, said he was giving the money, a prize of US$150,000, to the Mangyan people. “It’s not only money that counts for them,” he told the press, “but also the spirit ties with the land, which mining companies do not understand.”

Gariguez and the five other prize winners traveled from San Francisco to Washington, D.C., where they participated in comparable ceremonies a few days later at the Smithsonian Institution’s Museum of Natural History.