The government of Montana took an anti-Hutterite law to the state Supreme court last Wednesday, arguing that its 2009 statute, which forces colony businesses to provide workers compensation, is necessary in order to be fair to non-Hutterite construction firms. 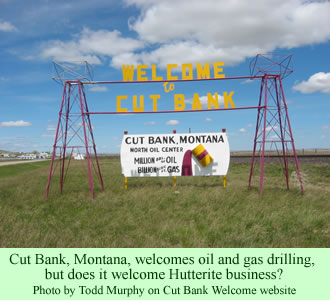 A state judge had already decided that the law forcing the Hutterites to pay for workers compensation insurance violates their free exercise of religion. The state is appealing that decision, reasoning that the law was intended to affect only commercial operations of the Hutterite colonies and not their religious practices.

The Big Sky Colony, located in the northwestern part of the state near Cut Bank, had filed a suit against the 2009 law. The colony claims that, through the Hutterite Medical Trust, it already provides insurance for its members. Big Sky attorney Ron Nelson refers to the law as “window dressing” which serves to ease political pressures on the legislature from the construction industry. Their real competitive edge, the colony argues, comes from the fact that they do not pay wages to their workers as the other construction firms must do.

The fact is, the colonies do not need to protect workers from lost wages if they have accidents. They don’t get wages. They don’t need to be protected from liability claims—their workers don’t file such claims. A Hutterite worker has never made a hostile claim against a colony business. The Hutterites also don’t vote and don’t serve in the military. They make their own clothes, produce their own food, and erect their buildings themselves. In short, they lead very different lifestyles from other citizens of Montana.

Mr. Nelson told the Supreme Court that “their core belief is that they have no property. All the property and labor they have, they contribute to the colony.” But they are easy to persecute, since their clothing makes them look different from other Montana people, he said. He added, “the colonies have suffered persecution and [they have] migrated and immigrated and moved for the past 500 years. They’re very protective of their religious beliefs, and they just can’t let that go. They have to assert their religious rights.”

Stuart Segrest, an assistant Attorney General, argued on behalf of the discriminatory law on Wednesday that the Hutterite claim for religious protection cannot apply when they engage in commercial activities. “They’re not allowed to become a law unto themselves,” he maintained.

Chuck Hunter, the state representative who introduced the controversial law in 2009, admitted that his act did, in fact, specifically target the Hutterite colonies. He said that the law would create “a fair playing field” for businesses that wanted to compete against Hutterite firms.

Another proponent of the law, Cary Hegreberg, the executive director of the Montana Contractors’ Association, echoed the same industry plaint. He said, “it’s just frustrating for a private business that has to pay various taxes and workers’ comp insurance to find themselves undercut competitively by an entity that is not subject to those same requirements.”

However, an attorney for the Big Sky Colony, Michael Talia, described the Hutterite way of life for the Supreme Court by saying, “as an act of faith and worship, each individual is committed to the group. They have no television, vacations, home improvement loans or college tuition to pay for.”

That attorney added, “members voluntarily provide all of their labor and support to the colony as an exercise of their religious faith and without expectation of or entitlement to pay, wages, salary or other compensation.”

The attorney general’s lawyers responded that the Hutterite way of life should not exempt them from the workers’ compensation law and regulations. Those requirements would not infringe on the internal affairs or religious beliefs of the colonies, they maintained. Referring to the lower court decision, Attorney Segrest argued, “taken to its logical conclusion, this decision would empower (the Hutterites) to avoid any burdensome regulation, because that regulation would necessarily affect some aspect of their religious lifestyle.”

In November 2010, Canadian news media covered similar complaints by businesses in their country. The Canadian companies argued that they, too, could not compete against the Hutterite colony firms, which did not have to pay for wages or insurance. On the U.S. side of the border, there was a lot of negative public opinion about the Hutterites in the Cut Bank area in 2005 when a large ranch was sold to them, though some people in that community expressed positive opinions about their neighbors, in part because they recognized that the colonies contributed a lot to the local economy.

Janzen and Stanton (2010), in their thorough survey of the Hutterites in North America, describe colony relationships with outsiders in Canadian and American communities as either staying the same or even deteriorating in recent years. Neighbors of the colonies continue to hold false and malicious beliefs about them, the authors write. A 1998 report by the Montana Rights Network indicates that, in that state, in the words of the report, “resentment toward Hutterites appears to be growing [p.281].”

Janzen and Stanton argue that the antagonisms are based not only on false stereotypes but also on jealousies about the economic successes of the colonies. Opponents in Montana incorrectly claim that the Hutterites don’t pay taxes and collect welfare, when in fact they pay corporate taxes and generate a net income for their communities and the state. They rarely collect government benefits, don’t take food stamps, or participate in other assistance programs to which they are entitled , the two scholars write.