According to some entries posted last week on a blog by the skipper of the yacht “Jennifer,” which has been sailing through the Outer Islands of Yap State in Micronesia, the culture of Ifaluk Island appears to be resisting changes and modernization. 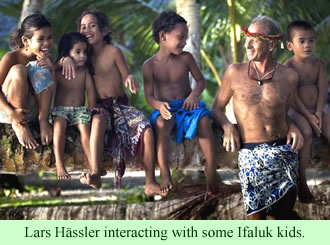 But Lars Hässler, the captain of the yacht and author of the blog entries, clearly does not romanticize the Ifaluk people. He wrote that after he and the crew piloted the 50 foot yacht into the lagoon, he visited the island chief, who wanted US$20 for a permit to anchor in the lagoon, which he was OK with. He resisted paying the additional US$20 per person aboard and made it clear that he would leave instead. The chief agreed to his terms, and accepted the anchorage fee only.

The Swedish yacht was visiting various Outer Islands, having just come from Lamotrek atoll. The skipper enjoyed the traditional culture of that island as well as of Ifaluk, the next atoll to the west of Lamotrek. He was told that the high chiefs on Yap, the largest island in that part of the Pacific and the headquarters of Yap State, had dictated that the Ifaluk and Lamotrek islanders should retain their old lifestyles, such as the men continuing to wear their traditional loincloths and the women their lava lavas.

Hässler said that Ifaluk is somewhat larger than the other Outer Islands they had just visited, with a population of about 500 people. He wrote that the place was spotlessly clean, while the paths were wide and neatly lined with palm trees. Fiberglass boats and outboard engines were not permitted, in an effort to retain traditional ways of fishing. He added that the island did have two fiberglass boats, but they were reserved for emergencies. The only visible signs of the modern world were a few solar panels.

One of the mornings, the author and a couple of his crew members noticed 15 canoes gathered together, so they set off in their dingy to investigate. They found the men of the island preparing to put up a new roof on a canoe house. Ten men threw pandamus or banana leaves up to about 25 men gathered on the roof of the building. The men managed to finish the new roof by lunch time and soon left in their canoes for their own homes.

Another day, the government supply ship arrived outside the lagoon for its semi-annual visit. It was too large to come in, so the islanders ferried in supplies with small boats. Hässler and the crew of his vessel all agreed that Ifaluk was the nicest island they had visited so far on their journey around the Pacific.

The author of the blog, a Swede, has written a number of books about sailing. He was born in Stockholm, obtained law degrees and worked in various legal and corporate positions, then mostly gave it all up for a life of sailing. He takes paying crew members to help defray the costs of his cruises. His website has links to pages about his various trips stretching back more than ten years.

Captain Hässler decided to continue on to Woleai, the next atoll to the west of Ifaluk in the Outer Islands chain. They didn’t like it. They found it to be not as nice, not as clean as Ifaluk. It is interesting to read their impressions of Woleai, since one of the major Ifaluk myths focuses on an epic fight with the people of that island, whom, according to the story, they all slaughtered in a battle. Of course over the centuries, they have evolved friendly relations with their nearest neighbors.

In any case, the Jennifer soon left Woleai to head for Yap itself, a much larger, mountainous island with many of the amenities of modern civilization—restaurants, Internet access, fresh food. Besides, Hässler writes, “everyone was by now a bit ‘outatolled’.”