The goal of raising Inuit children who are able to speak their native Inuktitut has just been undercut by the government of Nunavut, which has deleted funding for a preschool language immersion program in Iqaluit, the territorial capital. Despite comments by government representatives, it is not completely clear from a news report last week exactly what happened. 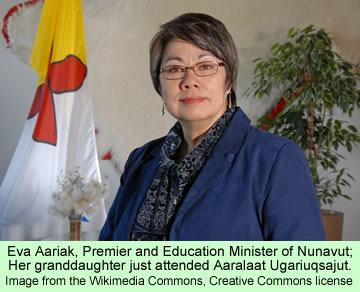 A free, half-day, preschool daycare program, called Aaralaat Ugariuqsajut, “language nest,” has been teaching Inuktitut for six years out of a donated school space. Funding by the territorial government’s Department of Culture, Language, Elders and Youth (CLEY) has paid for staff salaries. The agency just discovered, supposedly, that their regulations do not permit them to fund staffing salaries.

Mialia Lyta, the administrator of the agency, indicated to the preschool in a letter dated May 4th that it “cannot fund personal salaries according to our grants and contribution policy.” Leslie Payette, president of the non-profit language preschool, said the applications had been approved each previous year without any questions. The agency must have been aware of what the funds were supposed to cover.

Payette told the press that the normal cutoff date for funding requests is in March, so the school will have to layoff three staff members and close the program for 32 children. She said that the closing of the school will put a heavier demand on other daycare facilities in Iqaluit.

She also pointed out that the department has, as recently as its 2010-2011 annual report, been promoting the work of the preschool. “This pre-school Inuktitut immersion program fosters language and culture and builds strong foundations in participants’ first language,” it said. The report added, “This success of bilingualism in Nunavut is dependent on the young population and this program is undeniably a step in the right direction.”

Ms. Payette had her own terse summary of the situation. “With all due respect, I find it truly hypocritical.” She added that the program has been helping develop children’s literacy and comprehension of Inuktitut, which affects later literacy rates and graduation successes.

An intriguing feature of the story is that the granddaughter of Eva Aariak, the Premier of Nunavut, who also serves as Education Minister, attended Aaralaat Ugariuqsajut last year. Payette says that she sees the Premier as a leader who is committed to early childhood education. “I kind of would like the government to put their money where their mouth is,” she said.

Emily Woods, the press secretary to the Premier, said the government will be looking into the matter. “Early childhood education and language are a priority for the Premier,” she said. “The deputy minister of CLEY has committed to review this specific case, and we look to have more information shortly.”