A news story last October revealed that a Dariusleut Hutterite colony near Lewistown, Montana, had agreed to be filmed by the National Geographic Channel. The resulting weekly television series “American Colony: Meet the Hutterites” just had its debut on Tuesday evening, May 29th. 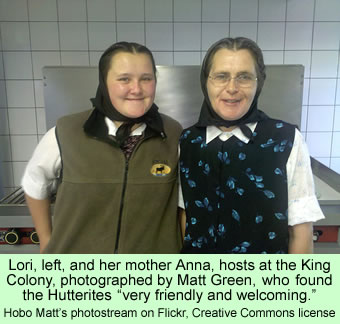 The location of the filming, not revealed when plans were being made, turned out to be at the King colony, located nearly ten miles west of Lewistown. To judge by the Associated Press review of the first installment, the series appears to be quite sensitively produced.

The focus of the series is on Bertha Hofer, a 52 year old widow and mother of three children who is seeking to balance her religious beliefs with the realities of life that her youngsters must face. David Lyle, the CEO of the channel, said that “when you look at Bertha, she’s a very good, committed member of this community, and she’s struggling to be one of the best parents I’ve seen on TV.”

Jeff Collins, producer of the show, says that one of the primary struggles of young people in the colony concerns access to modern technology. They see adults using farming equipment that their ancestors did not have—so why can’t they have things like iPads? Colony homes have cell phones and computers but the children are restricted from using them.

The show lets viewers see what goes on in the colony. Members are shown drinking alcohol, and they are heard to use curse words. But they also wear modest, conservative clothing. They have a lively sense of humor and do a lot of teasing, according to the newspaper article.

The program was developed by Trever James, a young filmmaker who grew up near the colony and had close connections with its members. The King Colony agreed to the filming when they learned that National Geographic would be responsible for it. Mr. Collins said that one of the selling points of the project to the Hutterites was the assurance that there would be no feeding of lines to participants to exaggerate dramatic events. It would be a very real type of reality TV.

According to Collins, “David [Lyle] and I said, ‘Let’s not ruin anyone’s life here. They’re interesting enough.” Mr. Lyle said that he and Collins both found that the world of the Hutterites—their emotions and challenges—relates to the lives of the rest of us. It is not clear how the members of the King Colony have reacted to the initial segments, which were planned for 10 installments. A spokesman for the colony had no comments.

Mr. Collins told a Montana reporter that while Hutterites are doubtless familiar figures in the streets of their towns, local Montana people had probably not been inside the colonies. He was most impressed by the technology that the Hutterites avoid. “These people really do live a lifestyle that is a throwback to 150 years ago,” he said. “It was a bit of something to get used to for somebody like me, who is from Los Angeles.”

When the officials visited the King Colony, they showed the Hutterites a National Geographic magazine issue from 40 years ago that had carried a feature about them. The National Geographic Channel has a website for the series which includes an episode guide, photos, an introduction to the cast, and short video segments from the series.