The Ju/’hoansi are a good example of a peaceful society that has problems with neighbors, but the ones in Namibia have legal ways of dealing with invaders who settle on their lands. 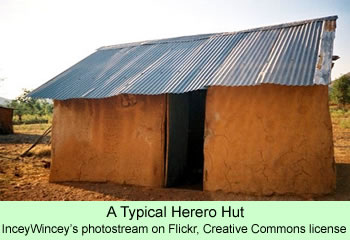 A news story last week in the Namibian paper the New Era, written from the point of view of the invaders, indicates that a previous chief of the Hai-khom San gave groups of invaders permission to settle near Tsumkwe, a town that has developed in the heart of the traditional Ju/’hoansi territory. Those newcomers have built homes and have been living there ever since 1987, long before the most recent invasion of Herero from Gam. Their residence thus predates the ascension of the current Ju/’hoansi chief, Tsamkxao, who took office in 2000. The current chief has been demanding that the settlers must leave, and the laws of Namibia appear to back him up.

Juda Nganjone, the spokesperson for the settlers, told the press that they originally came from Ovamboland, Gam, the Kavango Region, and other areas of Namibia. They own nearly a thousand sheep, goats, cattle, horses, and donkeys. They do not know where they will go if the Ju/’hoansi are successful in forcing them to leave. Some of the younger people were born near Tsumkwe.

Nganjone named various officials that they have approached, but none of them were very responsive. One official, Rukoro Masheshe, the Tsumkwe Constituency Councilor, responded that they must leave. He told them, according to Nganjone, that their “animals must not come to town [Tsumkwe].”

The settlers claimed that they had approached the Governor of the Otiozondjupa region, Rapama Kamehoze, but he brushed them off. They claimed, to the paper at least, that the governor had brought the invaders from Gam in 2009, since he was looking for a place to settle them. That bit of information, of the governor’s complicity in the invasion, was not reported in the earlier news stories. It is possible that the New Era reporter did not read the news reports about the 2009 affair.

The 2009 invasion of herders from Gam, south of the Ju/’hoansi-managed Nyae Nyae Conservancy, posed threats to their territory. The Ju/’hoansi fought—peacefully—to resist the invaders and have them expelled. The Herero farmers who cut the fences and brought in their cattle could have exposed the entire beef industry of Namibia to a worldwide boycott due to the threat of foot and mouth disease, which may be present among the wild ungulates in the Conservancy.

After a lot of disputes, the involvement of various government officials, and much posturing, the case appeared to be closed in April 2011 when a final settlement was reached in a Namibian courtroom. It was not clear when the Herero would be required to move out of the Conservancy.

The news report last week indicates that the traditional chief of the Ju/’hoansi, Tsamkxao=Oma, has demanded that all of the non-Ju/’hoansi settlers in the Tsumkwe area must leave with their herds. Earlier news reports gave his name as Bobo Tsamkxao or just as Chief Bobo.

The Ju/’hoan chief sent a letter to 22 settlers, including Nganjone, the spokesperson, informing them that the Conservancy would take legal action against them if they don’t leave. “I want to notify you that as Chief Tsamkxao =Oma, empowered by the Communal Land Reform Act 2002 and the Traditional Authorities Act 2000, I have not given authority for the grazing of livestock, building of any structures or to settling on the Nyae Nyae communal lands other than by Nyae Nyae community members,” he wrote.

Nganjone has continued to seek audiences with Namibian government officials, but without any successes.