Queen Elizabeth’s Diamond Jubilee has just been celebrated on the remote island of Tristan da Cunha by 262 British subjects, who are among the world’s most enthusiastic supporters of the English monarchy. The quiet, judicious style of the Queen has endeared her to her subjects, including those on Tristan. The celebrations commemorating her 60 years on the British throne have captured news headlines worldwide, including those of the South Atlantic UK territories of Tristan, St. Helena, and Ascension Island. 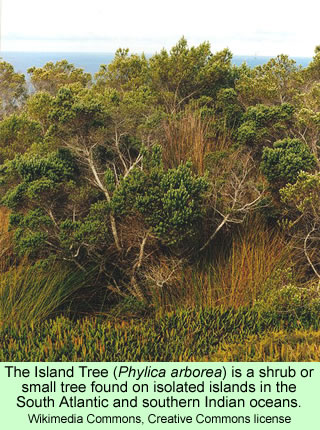 On Tristan, Chief Islander Ian Lavarello lit a beacon on Monday this week. The framework for the beacon was built out of limbs from non-native trees ripped off by a gale in May. The rest of the beacon consisted of debris from invasive species that the Tristanians have been clearing as part of an effort to restore the indigenous flora of the island. New Zealand flax, loganberry, and other invasives were cut and their woody remains piled up for the bonfire. The islanders did not use any of Tristan’s only native shrub, called the Island Tree (Phylica arborea).

The islanders felt that this burning, a practical way of helping restore the native plant habitat, would be a good way to symbolize the Queen’s jubilee. Mr. Lavarello commented about the construction of the beacon that “living in such a remote place we never waste anything, so this seemed a very good way to let us be part of the world-wide lighting of the beacons and protect the very special environment of Tristan da Cunha.”

The Tristanians erected their beacon on the lava flow at a spot where it would be easily visible from the Settlement. The solidified lava where they built the beacon came from a volcanic cone that erupted near the Settlement in 1961. The eruption that year forced the British authorities to evacuate the islanders to England for over a year.

According to Peter Munch’s book Crisis in Utopia, the Tristanians had to learn to negotiate with colonial officials in London in 1962, during their exile, to pressure the government to let them return to their beloved island. Their incredible unity—they voted 148 to 5 to reject the comforts of UK life in order to go back to their familiar, peaceful community in the South Atlantic—evidently impressed the officials so much that they stopped trying to block them from returning.

The islanders have continued to be fiercely loyal to England and to the Crown ever since. Mr. Lavarello commented, “we are thrilled and we’re honoured that we can celebrate the Diamond Jubilee of our Queen here on our home, the most remote inhabited island on Earth.”

The Tristan da Cunha Association has opened a page on its website devoted to the Diamond Jubilee celebrations on Tristan on June 4th, complete with many photos. The plans for the celebration included a Service of Thanksgiving at one of the churches, a flag parade, a 21 gun salute, presentations of Diamond Jubilee medals to members of the Tristan da Cunha Emergency Services, a jubilee dance in the Prince Philip Hall, and, at 10 pm on Monday night, the lighting of the Jubilee Bonfire. However, a Tristan man was accidentally caught by a wave on a beach and washed out to sea on Saturday. The Islanders held their church service Monday morning and lit the Jubilee Beacon Monday night, but they postponed the other activities.

The website has many photos of the erection of the bonfire beacon on the island and the church service. The web page also includes some interesting historical information about the connections of the Tristanians to the English monarchy. While no reigning monarchs have ever visited, the second son of Queen Victoria, Prince Alfred, then the Duke of Edinburgh, visited on August 4, 1857. The Settlement was named “ Edinburgh of the Seven Seas” in his honor.

The current Duke of Edinburgh, HRH Prince Philip, also visited on January 17, 1957. He laid a cornerstone at Prince Philip Hall in the Settlement. He also attended, as guest of honor, the Tristan da Cunha Quincentenary dinner at the Royal Geographical Society in England on November 3, 2006. Thus, with the celebrations this week, the Tristanians continue to treasure and reinforce their strong connections with the mother country.