Leading Hutterites last week expressed many objections about the current TV series on their society, despite all the self-congratulatory noise two weeks ago from the producer, the National Geographic Channel. The series, “American Colony: Meet the Hutterites,” which portrays life at the King colony in Montana, debuted on May 29th and is running for ten Tuesday evenings. 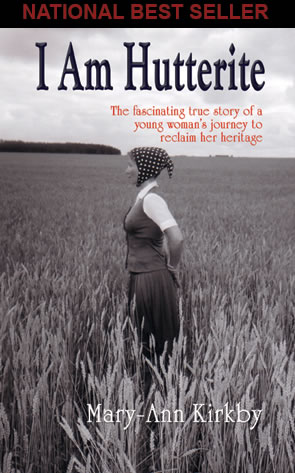 Mary-Ann Kirkby, herself raised until the age of 10 in a colony, said she had spoken with leading Hutterite bishops and she joined them in their criticisms of the show. Her memoir I Am Hutterite has sold widely, and she is a frequent speaker about the colonies. She told the press that the series portrays the Hutterites acting “completely out of character” and it shows “a great lack of judgment and decency.”

She feels that the program provides an improper interpretation of Hutterite society. She has spoken with many Hutterites in both Canada and the U.S. since the show began, and she has found the majority of them to be quite upset by what they are seeing. They feel the shows are staged, inaccurate, and “not representative of Hutterite colonies.”

The people Ms. Kirkby spoke with “expected the National Geographic treatment, but they got the Hollywood treatment,” she said. She added, from her own perspective, that Hutterites “are very charming individuals and worth knowing. We enrich the culture of both Canada and the United States.”

The bishops, representing different branches of Hutterite society, issued their own statement last Thursday expressing their deep disappointment with the National Geographic treatment of the King Colony.

“What was promised by the producers to be a ‘factual documentary’ is, in fact, a distorted and exploitative version of Hutterite life that paints all 50,000 Hutterites in North America in a negative and inaccurate way. Scenes and dialogue were contrived resulting in a ‘make believe’ depiction of how we live and the spiritual beliefs we cherish,” the bishops wrote.

The bishops indicated that everyone thought it would be an accurate, sensitive portrayal of Hutterite life due to the stellar reputation of National Geographic. Their statement continues, “We are deeply saddened by the skewed image with which the public may now perceive the Hutterite faith and way of life. It is distorted and damaging, and we feel betrayed. We understand very well that we are not perfect and we face many challenges. Nevertheless, our vision is to live meaningful Christian lives in community as Christ has instructed us to do.”

David Lyle, the CEO of the National Geographic Channel, issued an amazing response to the criticism by the bishops. “This is a declaration of war from the Hutterite elders against the National Geographic Society, calling into account our fairness,” he said. “We absolutely are fairly representing the King community.” Isn’t Mr. Lyle even aware that one of the hallmarks of Hutterite society is their almost fanatical refusal to ever fight, especially in wars? His “declaration of war” metaphor completely undercuts his statement and reflects the insensitivity the Hutterites are claiming. Sad.