Conflicts between nature preserves and humans can be difficult to resolve, especially when migratory birds are threatened by Nubian farmers who have been deprived of their lands. An article last week in Egypt Independent, an English language publication, indicated that the Saluga and Ghazal Protected Area near Aswan, in southern Egypt, is being invaded by Nubian farmers who are planting crops in the bottomland soils of the preserve. 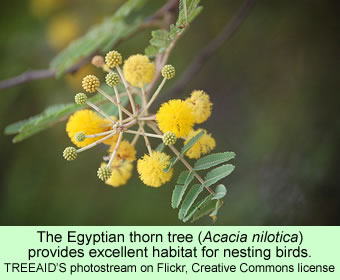 Also called the First Cataract Islands Protected Area, Saluga and Ghazal Islands are in the Nile River only a few miles downstream, north, of the Aswan High Dam, and a few miles south of the city of Aswan itself. The two islands are part of a string of 144 nature sanctuaries along the river, which serve as an important migratory route for birds flying between Central Africa and their breeding grounds in Eurasia. The natural vegetation on the two islands near Aswan represents a rare surviving example of the original Nile basin ecosystem.

Much of the Nile River native plant life was destroyed by the construction of the High Dam in the 1960s—and by farming activities along the entire river for millennia. Groves of Egyptian thorn trees (Acacia nilotica) thrive on these two islands. Small, dense, thorny trees originally native to the riverine environments of Egypt, though now found widely in Africa and South Asia, the trees provide good habitat for birds such as herons, kites, and especially nesting passerines. Natural fluctuations of the river levels create mud flats that are ideal for wading birds.

This reserve was considered important enough that a bird banding operation was established on the islands in 2003 under the auspices of the SE European Bird Migration Network (SEEN). The goal of the banding has been to determine which species of birds, and whether adults or juveniles, use the Nile corridor, the Red Sea corridor, or a combination of both for their migrations. As with any such research, the preliminary results are raising as many questions as they are answering. A Google Scholar search this week of Saluga and Ghazal turns up 20 references to scientific papers based, at least in part, on this important sanctuary.

Unfortunately, the preserve is threatened by incursions from humans—landless Nubians. Early in 2011, some Nubians, having grown bold due to the Egyptian revolution, invaded the reserve, cleared a portion of the natural vegetation, and began planting crops. The Egyptian Environmental Affairs Authority (EEAA) asked the police to remove the invaders from the reserve. They refused.

Mostafa Hussein Kamel, the national environmental minister, got involved in the situation last week during a visit to Aswan. At the end of a whirlwind tour of the city, his motorcade stopped at the visitors’ center for the reserve on Saluga Island. Someone told the distinguished visitor about the Nubian trespassers. He turned to the Aswan governor, who promised that they would be expelled promptly. Three days later the police had still not done anything. According to the article, police had evicted invaders from the reserve before the revolution, but now they won’t. The unrest among the Nubians, and their demands for lands along the river, have apparently had an impact.

Mahmoud Hasseb, the director of the South Area Protectorate at the EEAA, indicates that the police are afraid to chase out the squatters. He believes that in the aftermath of the revolution, police officials feel they do not have the authority to do such things. The danger is that the successes of a small group of invaders might encourage others to move into the bottomland protected areas on the river islands.

Other lands in the Egyptian protected areas system have also been invaded recently and nothing has been done to protect them. Hasseb is waiting, hoping the police will soon be able to take action. “After two or three months the police will be stronger,” he said. “They will be able to do the things that they did before the revolution.”

But the situation is filled with hypocrisy. Over 20 years ago, when the system of protected islands was being established, one of them, Isis Island, was set aside for the construction of a large resort complex. Hypocrisy and corruption are, of course, an important part of the Nubian perspective on their country. Last week, Al Jeezera produced a news segment in which a reporter explains how neglected and badly treated the Nubians felt under former president Mubarak. But they are optimistic with the election of a new leader, he tells viewers.

The brief news report, posted to the Al Jeezera website, includes some choice comments by a few older Nubian men. Salahuddin Husain shows some photos to the reporter and shares his memories. “When we were forced to leave our homes [in the 1960s], we moved to the towns built by the government. But when we got there, we found that most of the houses weren’t built. Thousands of us became homeless.”

The reporter turns to another older man, Ismail Ghallab, who says he also was forced to move. “We sacrificed. We sacrificed our homes and our ancestors’ graves for the dam to be built, and in return we’ve been given nothing. We’ve been marginalized and made homeless.”

The journalist, Jamal El-Shayyal, indicates that the Nubians are farmers, but they are being forced to live in desert towns that are not developed, without houses. He walks among walls with no roofs—uncompleted or mostly destroyed houses. Apparently the resettlement site for the Nubians was poorly chosen because the land is geologically unstable. Homes have either not been built, or have been constructed and then collapsed.

A man rides past on a donkey cart as the reporter explains that, despite what has happened, the Nubians are optimistic. “We will never forget our origins, and even the Nubian child born today considers himself displaced and wants to return to the banks of the Nile,” one of the men tells the reporter. “We hope that the next president can relocate us to the Nile and give us back our livelihood.”

The reporter tells us that the Nubians continue to hold onto their culture. They dream that someday they will be able to leave the desert so they can again live next to the river. Can the Egyptians preserve the wildlife habitat of those important riverine islands in the face of such pressures?