One result of the peaceful values held by Ladakhis has been the frequency of interfaith marriages, which are widely accepted among both Buddhists and Muslims, according to a news report last week. The story indicates that, despite the interfaith troubles of the late 1980s and early 1990s, tensions have subsided and the local beliefs in harmony prevail. 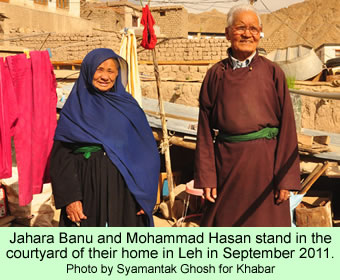 Fifty years ago, Mohammad Hasan, a Muslim who is now 70, met a girl named Dolma, the 15 year old daughter of a Buddhist trader from the Nubra Valley, a remote place to the north of Leh. Her father had a shop in a Leh market. Hasan’s pride at first would not let him approach the father and ask for the girl’s hand in marriage.

But subsequently, he rode horseback over the mountains to Nubra and the families quickly agreed on an Islamic-style wedding. She was renamed Jahara Banu, but she did not convert to his beliefs. She has continued to visit the Old Leh Palace Monastery as a practicing Buddhist. He retains his Muslim faith.

Hasan, a retired soldier with the Indo-Tibetan Border Security Force, tells the journalist writing the story, Sahana Ghosh, that their experience is quite common. “Most families in Ladakh have stories of mixed marriages,” he asserts.

The author writes that the sense of religious identity in Ladakh is quite strong, but it is not a divisive issue. She points out that most of the residents of the Kargil District are Shia Muslims, with Sunnis mixed in, while most of the people of the Leh District are Buddhists, with some Muslims included. Everyone shares common cultural mores—dress codes and food preferences, for instance. The common features of both communities help people overlook their differences.

Sonam Gatso, a next door neighbor to Hasan, explains the ways religious harmony work out in practice in their Leh neighborhood. He points out that the road to the monastery goes right past the mosque. The monks are careful not to sound their chimes when the calls to prayer are issued from the mosque five times per day.

Ghosh, the author, refers to the interfaith troubles of 1989, which occurred during a period of insurgency in Kashmir. The Buddhists in Leh were afraid that their rights would be eroded by the Muslim dominated state of Jammu and Kashmir, of which Ladakh forms a minority part. The Buddhists formed an advocacy group, the Ladakh Buddhist Association, which urged people to not engage in commercial relations and especially to avoid inter-faith marriages with The Other.

The tensions soon fizzled out, however: Ladakhi Shia Muslims have more in common with Ladakhi Buddhists than they do with the Sunni Muslims in Kashmir who dominate the state. The government of India helped diffuse tensions by instituting, in 1995, a new local government structure, the Ladakh Autonomous Hill Development Council. The Kargil district got a similar autonomous council in 2003.

But a bigger issue, according to Ghosh, is that the young people have more to think about than Buddhist/Muslim rivalries. They are focusing on jobs and livelihoods. Manjul Ahmed, a 25 year old, received a Masters degree in sociology at a university in Srinagar, but he is now helping attend his father’s grocery store. He has a Buddhist girlfriend, and he goes back to Srinagar frequently to take competitive exams for government positions. “There are no job opportunities in Ladakh, except in tourism,” he says.

Ghosh’s investigation of interfaith marriages, and the way traditional harmonies in the region are reviving, presents a hopeful picture of the restoration of good community relations. Perhaps her perspective is correct, though a scholarly journal article by Sara H. Smith published three years ago painted a somewhat different picture of the situation. That author, a geographer at the University of North Carolina, argued that ever since the troubles of 1989, interfaith relations in Ladakh have been deteriorating. She did field work in Leh intermittently from 2004 through 2008.

Smith also interviewed mixed Buddhist and Muslim couples. She spoke with a Buddhist man and his Shia wife, both of whom agreed that they wanted to ignore community pressures and get married. Smith indicated that many families included couples married across the Buddhist/Muslim divide, and many people continued to visit households of the other faith, despite pressures from both sides to boycott the other. The boycott instituted by the LBA was simply unenforceable because of the extent of interfaith unions.

The geographer interviewed Ladakhis who felt that marriages between people of different faiths do help create harmony. Nonetheless, Smith argued that the discord of 1989 has had the effect of undercutting much of the inter-community visiting that used to prevail. Muslims and Buddhists no longer entertain each other in their homes as much as they used to, particularly during the major religious festivals and celebrations.

It is not clear whether intercommunity tensions are getting slowly worse, as Smith’s research implied, or whether relations are slowly improving because of the traditional Ladakhi beliefs in harmony, as Ghosh’s investigation concludes. The reader may be cautiously optimistic.

Incidentally, Ghosh’s article appears in Khabar South Asia, a news and features website that is sponsored by the US Pacific Command.