A Kansas county has become the latest American community to take a hard line against the Amish use of unregulated outhouses, according to a news story last week. The adversaries explored the issue at a meeting of the Bourbon County Commissioners, who indicated that they were studying the matter. 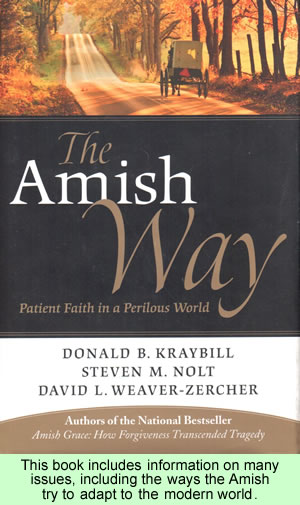 Apparently, fairly conservative Amish families began moving into the eastern Kansas farmlands about 10 miles outside of Fort Scott, the county seat, seven years ago. No one told them at the time that they were building their outhouses using an illegal design. Their practice is to shovel the waste out of the pits beneath the outhouses periodically and plow it into their fields. The focus of the discussion was on complaints against that practice. There are now 25 Amish families in the county.

Chris Borntrager, an Amish man speaking at the meeting, asked the commissioners, “is there any evidence we are polluting anything?” The chair of the commission, Harold Coleman, replied that he wasn’t able to answer the question. But he did say that laws prohibiting their ways of doing things must be upheld.

The reporter contacted Steven M. Nolt, the author of numerous books on the Amish, for more information . Nolt is one of the co-authors of the recent book The Amish Way, which indicates that a large majority of Amish homes have bathrooms indoors. More traditional Amish, however, still use outhouses.

He told the Reuters reporter basically the same thing. “A lot of newer and smaller settlements such as the one in Kansas are more conservative and are trying to move away from the more worldly settlements.” He explained that other communities in the U.S. have dealt with issues similar to the one Bourbon county is facing—very conservative Amish who refuse to follow local sanitation ordinances. A good example would be the standoff between some Amish families in Cambria County, Pennsylvania, in 2009, which was widely reported in the press.

Tom McNeil, Bourbon County director of sanitation, admitted that seven years ago “nobody wanted to get involved in the government-religion thing.” He told the reporter that they dropped the ball at that time. There are various ways of constructing outhouses and disposing of the human waste that conform with county regulations, which the article carefully explains.

Evidently the commission is exploring several options to see what is possible, and, presumably, what the Amish will accept. County officials are working with the state to see what can be done. Though it is not said in so many words, the article implies that everyone is hoping to reach a compromise solution.

Neighbors to the Amish families, Dennis Meech and his brother Jim Meech, spoke about their growing alarm due to the lack of correct sanitation on the neighboring farms. While there is probably not much of an issue at this time, they told the commissioners that if the Amish community continues to grow, a very significant problem may develop in 50 years.

The reporter interviewed Marita Meech, Jim’s wife, separately. She explained how the neighbors have tried to get to know the Amish by buying produce from them. “We get along with them,” she asserted. But, she added, “as time goes by more structures are going to be built. How long is the county going to continue letting that happen.”