A recent 40-minute documentary film chronicles the lives of some Malapandaram who still live nomadically much of the year in the Kerala forests. The New Indian Express, a major English language daily that serves South India, published a story last week describing the film. R. Gopinathan, the filmmaker, spent six months working on his documentary, “Ayar Parayunnu,” which focuses on the lifestyles of the people. 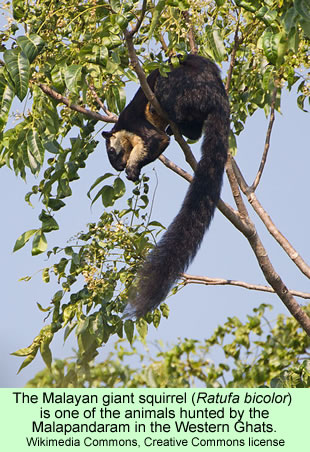 The Malapandaram, the film reveals, like to eat what they call “Kavalakizhangu,” the fruit of the wild “Vellila” plant. Another source describes Kavalakizhangu (Dioscorea oppositifolia) as a tuber rich in starch and pulp. The tribal people also use it as a tonic and as a treatment for snake bites and swelling. The Malapandaram frequently prepare food dishes with a powder made from a wild palm which they call Kattu pana. When they can, they will eat the meat from animals such as mongoose (they call it “keeri”), civet cat (“veruku”), and the Malayan, or black, giant squirrel (Ratufa bicolor).

The film points out that the Malapandaram don’t bother with the formalities of marriage ceremonies—they just live together with their partners. Gopinathan, an Emeritus Fellow in the Department of Malayalam at Kerala University, indicates that dogs are indispensable in the lives of the people. They “act as if they are trained to guard their masters,” the filmmaker says.

The production portrays the rituals and beliefs of the people. They worship at a place called a “sannidhi,” which is not really a temple, for there are no idols as such. Rather, they pray to a tree around which they have tied a red colored cloth, with a camphor burning on a betel leaf in front.

Gopinathan said that he completed the work in stages, since he had to locate the wandering bands each time he wanted to resume filming. He told the newspaper that the Malapandaram used to speak their own language, a mixture of Malayalam, the language of Kerala, and Tamil, the tongue of Tamil Nadu. Now they just speak Malayalam, since the younger generation hasn’t learned their traditional language.

The film, sponsored by the Cultural Department of the government of India, also focuses on the settlements provided by the government that they inhabit sporadically. They are poorly maintained. Their settlements in Kerala are Aryankavu, Achankovil, and Mambazhathara. The news story does not indicate if, or when, the film will be posted on the Internet.