The Kadar workers in the Parambikulam Tiger Reserve were singled out last week as one of the key reasons for the nature sanctuary’s recognition as one of India’s best protected natural areas. The reserve, located in the mountains of eastern Kerala state in southern India, has been accorded top honors along with other internationally-known treasures such as the Corbett National Park and the Periyar Tiger Reserve. 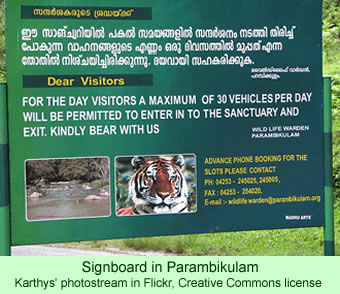 The reason for the recognition of Parambikulam has been the comprehensive management approach taken by the park, which has 15 to 18 tigers, and the way the Kadar and the other indigenous peoples living in it are incorporated into its management.

The reserve will be recognized at a meeting of the United Nation’s 11th Convention on Biological Diversity, which will be held in Hyderabad beginning on October 8th. Parambikulam has won its recognition, according to a news story in the Times of India last Friday, by reducing human-animal conflicts and increasing biological diversity. India has more than 800 protected areas—parks, preserves, forests, and so forth.

An Indian Supreme Court decision prohibited tourism activities in the core areas of the nation’s tiger reserves, but Parambikulam has nonetheless been able to employ the local tribal people for forest protection work, according to Wildlife Warden K. Vijayanandan. He told the newspaper that the reserve helped develop the tribal peoples through a form of community-based eco-tourism. Over 250 tribal peoples have benefited from the program, both as park workers and as helpers and guides to the tourists.

The news story last Friday indicated that enhanced tiger protection afforded by the designation of the wildlife sanctuary as a Tiger Reserve had required the tribal peoples to get rid of all their livestock, including poultry. The reporter wrote that they don’t mind, since they have steady incomes instead.

One result of the effective human/animal management strategy has been the decline of poaching. N. Babu, a tribal person not identified by the newspaper with a particular society, said that the reserve had not witnessed a single incident of tiger poaching since 2004. Furthermore, there has not been a forest fire in the reserve since 2007, he asserted. “We were able to do tourism in a very eco-friendly way,” he said.

“Tribal people have become part of the Social Tiger Protection Force and are effectively combating forest and wildlife-related offences. Here there is no man-animal conflict,” said Warden Vijayanandan.