Michelle Bachelet argues that a much stronger economic and political role for women in India will not only be the right thing to do, it will send an important message to the world. She summarized her thoughts on the subject during a speech in New Delhi at the beginning of October. 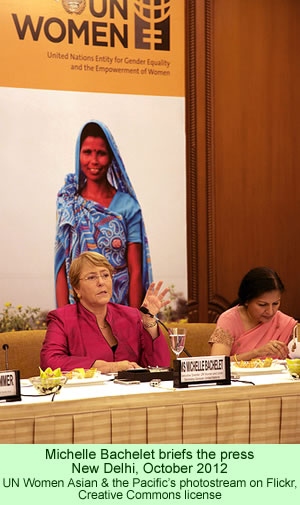 The former president of Chile is now the Executive Director of the United Nations Entity for Gender Equality and the Empowerment of Women (referred to as “UN Women”). Bachelet called for the Indian parliament to set aside one-third of its seats for females, and she argued that the government should develop social protection schemes to improve the health, education, and economic status of women.

Her focus on women in India was quite timely, but the peaceful societies of that nation are well ahead of her. Or at least they have already started trying to develop better rights for women in their own ways. A news story last week indicated that women in the north Indian region of Ladakh have, for centuries, been highly valued in their society. Two other peaceful societies in India were also in the news last week for activities that may, in time, help promote the economic and social equality of their women.

At the beginning of last week, some Yanadi people held a rally in the city of Nellore, in the Nellore District of Andrha Pradesh, to highlight their problems and demand improvements. One of the key demands made by the placard- and banner-holding demonstrators was for the immediate distribution of land to Yanadi women. They said that lands that had been expropriated from their women should be returned to them. Another demand was that the government provide permanent houses for Yanadi women.

Mallika Sailaja, convener of a women’s empowerment organization in the district, said that long standing demands for the creation of new offices that should help Yanadi women have yet to be instituted in the Integrated Tribal Development Agency. The ITDA is an office in the state government established in 2001 to assist the Yanadi people in Nellore and two other districts.

A few days later, on Thursday last week, Sundar Birhor, one of the Birhor boys selected by Bokaro Steel Limited for their new crop of students to attend school in Bokaro, India, where he will receive a free education, gave the press a sad story. He told a reporter what happened when he had to leave for Bokaro City. “When I left my village home in June, my sister Munni asked me when she would join me in school. I had to keep quiet,” the boy said.

Another Birhor boy, Manoi Birhor, chimed in to add that his sisters were also not offered opportunities to get an education. So the 15 boys, all ages seven to nine years old, joined together and agreed to change the situation after they graduate. “We will study hard, get jobs and then open schools for girls in our villages,” Sundar said.

These two brief reports are, of course, just small steps in the efforts to gain more equality for women and girls in India, and that development will take some time. But the news stories, taken as a group, imply that fair treatment for women is a very real issue among at least some of the peaceful societies.