The Schwartzentruber Amish are finally leaving Cambria County, Pennsylvania, and the local paper, the Tribune-Democrat of Johnstown, is obviously pleased. In an editorial last Friday, the paper presented its law-and-order stance against the Amish violators of local regulations. It indicated that the Schwartzentruber families had refused, for their own religious reasons, to put safety orange triangles on their buggies, to use county-approved outhouses, to follow building codes in the construction of their homes, and so on. They must comply. 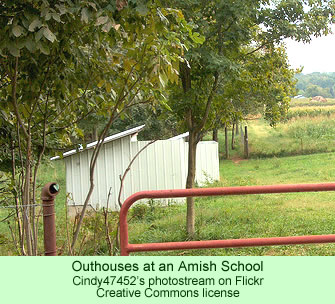 The editorial stated that the paper respects people’s rights to practice their beliefs so long as they are not in conflict with public laws and regulations. If they are, the newcomers, who may have different beliefs, still must accept the laws of the new community. “No exceptions,” the paper stated. The editorial concluded with the fatuous statement, “We wish our former Amish neighbors well.” Right.

The Tribune-Democrat carried a news story earlier in the week that reported on the fact that the Schwartzentrubers had finally made the decision to move away. At the height of their numbers a few years ago, 21 families lived in northern Cambria County, northwest of Ebensburg, the county seat, in Barr and Blacklick Townships. Many had bought farms and were dairy farmers.

When they started arriving 15 years ago, they quickly got into trouble with the police for refusing to affix slow moving triangles to their buggies. The bright orange triangles are too flamboyant for the Schwartzentrubers, an ultra-conservative Amish sect. Compromise solutions such as one worked out by the Amish in Kentucky with officials in that state about this same issue appear to have not occurred to people in Cambria County.

The county made the national news repeatedly, especially in the 16-month period from June 19, 2008 through October 22, 2009, over their refusal to follow county regulations about the proper disposal of wastes from their outhouses, particularly the ones at a schoolhouse. The correct construction of their buildings also became an issue. They felt that the regulations violated their religious beliefs, and they were unwilling to compromise. Neither was the county, of course, nor the judge who was in the position of enforcing the regulations.

As a news story in January 2012 indicated, the Amish, and local officials, seem to be much more attuned to working out creative compromises in the southeastern section of Pennsylvania, in Lancaster County and surrounding areas, where they have lived for centuries, and where their presence represents a huge generator of tourist dollars for local businesses.

It is not so much that the people of southeastern Pennsylvania all strive for compromises as that the attitudes of the English, the non-Amish people, are generally positive toward them. In that section of the state, people want them to stay, and value them as neighbors. In Cambria County, they were newcomers, different. Instead of cherishing, or even honoring, their obvious differences, many of the neighbors simply wanted to make sure they would obey all the regulations.

The Blacklick Township supervisor, Joe Sherwood, told the Tribune-Democrat, “they are very honest and hardworking, but you have to comply with the laws of the state.” Other Cambria County residents evidently agreed, to judge by the two reports in the paper last week and the many earlier stories.

The resolution of a minor controversy in Jackson Township, Lebanon County, PA, just north of Lancaster County, in January 2012 highlights the differences. The Amish there wanted permission to build a new schoolhouse but to not connect it to the public water system, as regulations appeared to require. The township solicitor quickly found a compromise. He told the supervisors, “So if the notice is never received from the township, then it wouldn’t be required.” He wasn’t advocating violating the law—just creatively finding a way to not hassle the Amish.

As of Friday, November 9th, the 21 Amish families in Cambria County had shrunk to nine, and the rest are planning to sell and move away soon. The local bishop is tightlipped about his plans, but a young couple, who didn’t want their names used by the newspaper, indicated they had already sold their farm and were moving to rural northern New York state. The man told the paper that they had sold to another Amish family, people with more modern ideas than he had.

County officials and Amish leaders were, in fact, able to resolve some of the issues that had provoked controversy surrounding the construction of two new houses. The regulators objected to the sizes of the windows and the design of the porch railings. But both sides ultimately were able to work out their differences. The judge who had ordered the two homes to be padlocked accepted the compromise solutions at the end of last year, and lifted the order closing them. But by that time, the Amish had already decided to move away from the county, according to one Amish man. A compromise solution appeared to be in the works for dealing with the sewage issues as well.

Donald Kraybill, a prominent Amish expert from Elizabethtown College in Pennsylvania, had already heard about the migration of the Amish away from the county. He said that the remaining Amish plan to leave in the spring. He indicated to the paper that it is not at all unusual for Amish people to migrate for reasons such as conflicts with local governments.

All of this is reminiscent of a news report last month about the Paliyans. That story indicated that the traditional Paliyan style of dealing with aggression has always been to simply leave the scene, to flee if necessary, to turn the other cheek, as one Paliyan man said to anthropologist Peter Gardner some years ago.

The term “nonresistance,” originally used just for Christian groups such as the Amish and Hutterites who insist on taking the words of Jesus literally—to not resist evil—is just as applicable to folks who retreat hastily into the nearest forest as it is to Christians who abandon a community where they are hassled. Paliyans, Batek, Buid, Chewong, Hutterites, Amish—what’s the difference? Many of the peaceful peoples simply refuse to fight. They are completely unwilling to violate their principles, to contest the will of others. It is best to retreat in the face of conflicts, they feel.