Last week, the program “The World,” from PRI, Public Radio International, focused on Nubians who were removed from their homes and are now living in the U.S. The mid-1960s closing of the huge Aswan High Dam across the Nile River in southern Egypt not only flooded Egyptian Nubian communities south of Aswan, it also displaced thousands of people from their homes in northern Sudan. 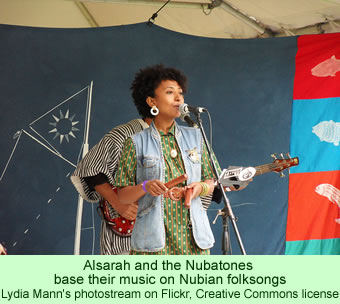 The town of Wadi Halfa, just south of the international border, was completely submerged by the lake, displacing thousands of people, including the family of Arif Gamal, now a professor at the University of California, Berkeley. He told PRI that he well remembers the sad day when, as a child, he got to play for the last time in his family compound. He recalls how, on their way out of town, the people stopped to say farewell at the graves of their ancestors, soon to be flooded by the reservoir.

Prof. Gamal cherishes his memories of his pet goat and the stony sand in his grandmother’s compound where he played. He explained that the sadness of exile, of moving away from their homes, prompted a boom in the lyrics and music of remembrance. Called “Songs of Return,” the Nubian poetry and music of today reflect the sadness and longing for a place that some Nubians never really knew.

The songs of palm trees and of the Nile River romanticize the land, he says, expressing an emotional tie that persists in the children and grandchildren of the exiles. Songs about “fenti,” for instance, refer to dates, the fruits of the palm trees that grew in the old, now flooded, communities. The new towns in the desert to which the people were relocated did not have date palms, hence the romantic memories.

Hamza el Din, a prominent Nubian musical icon and late friend of Prof. Gamal’s, celebrated the sounds and the feelings of the displaced Nubians. But creative Nubian exile artistry did not cease when he died in 2006. Nubian young people in the United States are reviving and reinventing their folk music.

For instance, Alsarah, a Nubian musician born in Sudan, heads a band in Brooklyn called Alsarah and the Nubatones. She draws on the music of her childhood, the folksongs of Old Nubia, in her compositions. Her song “Nuban Uttu,” which she sings in the ancient Nubian language rather than in Arabic, is a call to unify the dispersed Nubian people. She asks rhetorically, “How do you identify once you’ve lost your homeland? Where does identity now go?”

In the Washington, DC, metropolitan area, Mosno Elmoseeki’s songs also reflect his Nubian origins. He calls his genre of music “desert rock.” With accompaniments of guitar and tar drum, he infuses his songs alternatively with rock themes and Nubian melodies. As an example, his song “Land and Sea” narrates, in English, the story of “Desert Boy,” who agonizes about whether to migrate to a foreign land.

Mr. Elmoseeki migrated to Washington as a teenager from northern Sudan and, through his songs, he tries to counteract the image in America of constant violence in his homeland.

Younger Nubian Americans who have never seen Old Nubia are still passionately attached to the land of their ancestors. Safia Elhillo, a young poet and slammer at the New York University, expresses her grief in her poem “Atlantis.” She laments the neglect of her people by comparing the submerging of her ancestral homeland and the flooding of New Orleans by Hurricane Katrina. She, and the others, are seeking to keep alive Nubian traditions through their artistry.

The sound track of the PRI story includes some background extracts by the artists, and the songs and poetry by all of them can be heard on YouTube.