The people of Tristan da Cunha have a lot they could teach the rest of the world—more than just their skills at defusing conflicts and getting along peacefully. Some retired Tristanians are building a replica of a traditional thatched-roof dwelling on the east side of their settlement as a museum for visitors and as a way of showing their own youngsters how they used to live. The Tristandc.com website is chronicling the construction project, with many pictures and an interesting text to explain what is going on. 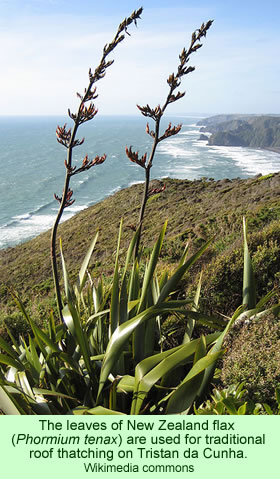 Dawn Repetto, the reporter, points out that the way the project is being developed showcases the cooperation that is endemic on the remote island in the South Atlantic. The use of traditional thatching on buildings was abandoned in the late 1980s in favor of solid roofing materials, so a group of islanders decided in 2009 to begin a “Thatched Tristan House Project,” to preserve an example of the traditional construction style.

The work gang initially consisted of five retired men, people who had experience in building with the soft, volcanic stones that can be quarried from one spot on the island, and who know how to thatch a roof. One of the men had to leave the project due to health problems, two others joined it, and they had additional help from other work crews whenever circumstance warranted. They are building the house/museum on the east side of the Settlement, near the lava flow from the 1961 volcanic eruption.

The reporter indicates that earlier this year she visited the site where the retired men were quarrying the large stones for the gable end walls of the house. She could barely lift the large maul they were using to hammer out the blocks of stone. She wondered at the physical strength these men must have had 50 years ago when they were in their primes.

The news report, amply illustrated with photos, shows the men quarrying the huge, soft stone blocks and putting them in place for the end walls of the house. Heavy winds in May 2012 blew over the completed east gable end, so the men had to rebuild it. The photos show the completed gable ends plus the front and back walls.

In October, the men used stones from an old wall surrounding a potato garden and reused them for a wall around the new dwelling. A week later, they cut the plants necessary for the thatched roof. Ms. Repetto explains that the thatching grass, called New Zealand flax (Phormium tenax), is an alien species introduced over a hundred years ago. The Conservation Department on Tristan is seeking to eradicate it everywhere on the island except within the Settlement itself.

Other photos show the workers raising the roofing timbers on November 5th. Two days later, the crew finally held its thatching day, the big event. Additional work crews from the fishing factory and from the government arrived at 6:30 AM to assist the pensioners in getting the thatching up on the roof.

About 40 men were on the scene, far more than necessary, but one of the objectives of the whole project has been to pass along to younger generations these kinds of traditional skills. The men worked in pairs, one under the rafters, the other above, sharing the thatching needles that attached the bundles of thatch to the roof.

The house required six rows of thatching on the front and six on the back, with a total of 1,500 bundles of thatch used to complete the job. The younger men quickly caught on to the work as everyone participated in getting the thatching up. The job was completed by about 3:30 in the afternoon.

Everyone seemed pleased at how well the project had gone. Ms. Repetto indicates that the roof will need to be re-thatched in about eight years, and the younger men felt confident they would be able to do the job again. Hopefully, the retired men will still be able to sit in the garden and supervise.

The pensioners are now working on finishing the inside of the house, which they hope to complete by Christmas. Photos show them completing the interior walls, ceiling, and floor. The website provides an historical note on the scarcity of wood on the island, and indicates that the islanders have traditionally recycled and reused wood from abandoned buildings and shipwrecks. The windows for the new house were fabricated by carpenters in the employ of the government.

Ms. Repetto’s most recent post, dated December 4th, shows interior photos taken on November 30th of a partition that divides the building into two rooms, one of the walls, and a shelf built over the fireplace. A vase of arum lilies, a common ornament in Tristan houses, is also visible.

Unfortunately, the website does not appear to post its photos to a Web hosting service, so larger versions of the images in the report are not easily available. People studying the construction of traditional houses, thatching techniques, and related skills will have to make do with the small images in an otherwise fascinating report.