Scholars and policy makers have tended to view Rural Thai villages as stable communities where people normally retain permanent residences. That stability is believed to be an essential ingredient in fostering both a healthy society and a productive economy. Migrations of people, according to that view, are a problem that officials and policy makers need to deal with. 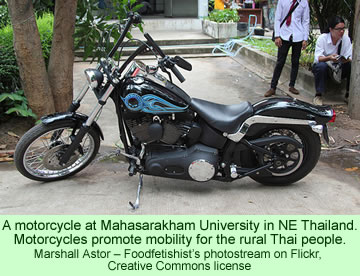 Even while the Thai people were increasingly leaving their villages many decades ago, at least for part of the year, to find supplementary employment, experts were seeking to limit the “problem” of rural migration by promoting development in those regions.

The authors of a study published last year have found that non-farming jobs have in fact been transforming rural Thailand at the same time that family farms have continued to be a resilient part of the national economy. They argue that in rural Northeast Thailand, even though family farms are still important and even though decision-making, management, and control of operations remain at the family level, farming is nonetheless eroding. It is no longer the sufficient, sustainable source of rural livelihood that it used to be.

A number of changes have occurred in rural Northeast Thailand during the 30 year period 1975 through 2005. The area under cultivation has remained roughly the same, but the number of farms, due to property divisions brought about by divided inheritances, has increased. At the same time, proportionately, the average area of farms has diminished.

Rural communities have adapted through increased mobility. As a result, the position and role of family farms have been changing along with the increasing mobility of rural people and the function and structure of rural households. These transformations have all been interconnected.

The authors have done careful studies—surveys and interviews—of the conditions in 77 households in two villages of Mahasarakham Province of Northeast Thailand to see how migration has affected development in the communities. While many scholars focus on macro-social studies of regional issues, the authors preferred to ask how migration actually affected people at the household level. The authors studied households in Ban Non Tae and in Ban Tha Song Korn, first in 1982-83, then in 1994, and again in 2008-09. These two villages, over the years, have been subdivided into six different communities.

In 1982, both of the villages were firmly lodged in the farming sector. Almost every farm was located in the immediate vicinity of the villages where the people lived, and most were devoted to the production of wet rice. Farmers used buffaloes for cultivating the crops, and they grew, in addition to the rice, cassava and kenaf for the markets. Farmland was occupied and worked by the owners, their family members, and others in the communities working under reciprocal exchange arrangements. People engaged in supplementary activities to add income to the families, such as making mats or harvesting forest products for sale.

Visually, the villages today appear to be the same, and they are still based on traditional, rural agricultural pursuits. They are surrounded by the same fields filled with rice, and the families that own them are still doing the farming. But much has changed. Buffaloes have nearly disappeared; houses are built in a more urban than rural style; and families own at least a motorcycle for transportation. Even more significantly, agriculture is now a subsidiary pursuit. People do not identify themselves as wet-rice farmers any longer.

The authors draw many conclusions from their very detailed studies of the two villages, and only a few can be summarized here. One is their observation that, in the 1980s, the rural Thai were primarily engaged in an agriculture that was based on household needs. Expectations at the time were that the economy would persist. Education of children beyond the primary grades was de-emphasized: why would a farmer need more than just four years of schooling in order to have minimal reading and writing skills to handle farm work?

Today, while farm work persists, it no longer dominates the households, and off-farm—and non-farm—work has increased a lot. Some of the trends have changed over the 30 year period. Migration increased from the 1970s through the 1990s, but leveled off in the 2000s. International migration to the Middle East, which grew in the 1970s, declined markedly after that. In the 1970s and 1980s, workers left their farms primarily during the dry season for jobs elsewhere, but more recently, many have left more or less permanently and gone directly to Bangkok, the major Thai metropolitan area.

Also, 30 years ago the migrants were primarily men; today women migrate about as much as men do. Furthermore, the pattern 30 years ago of daily commuting to nearby jobs has given way to permanent moves to communities where people find employment.

Now, better educated young people are leaving rural Thailand with very different worldviews and aspirations than their parents had 30 years ago. The authors find that the ways households in the two communities are dividing and reproducing are changing fundamentally.

Instead of making local, short moves within the same villages or to nearby places as they used to do, young people are now establishing their households at greater distances away from their parents, often in different provinces or in the capitol. Motivating forces are the access to easy transportation, the availability of preferred jobs, and easier communication. Increasingly, while people still live in the same communities as they did 30 years before, they work at a distance from their homes. The villages serve primarily as bases of operations.

In conclusion, Thai villagers, at least in Northeast Thailand, are no longer held hostage to the rural rice economy and the strictures of village life. But the changes cut many ways. Women and men may be able to easily find compatible work in Bangkok, but at times they have to find people in the villages to care for their young children. The agricultural system no longer forms the basis for rural life, for better or for worse.

The authors have a positive outlook, however. They see the rural villagers as no longer being pawns of national and international market forces. Instead, they see the rural Thai “as creative contributors to the national story (p.573).”