Zapotec towns that have been harmed by the operations of multinational mining firms were in the news last week due to renewed calls for protecting indigenous people and their water supplies. 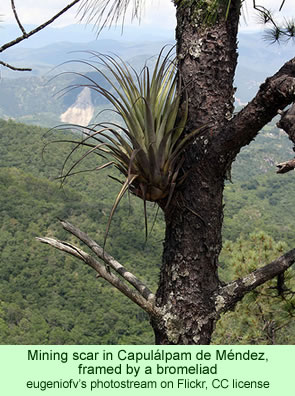 Last year at this time, several Zapotec anti-mining activists were gunned down in the town of San José Progreso due to the tensions raised by a local mine and the threats its operations posed to the safety of water for the community. The Canadian firm that owned the mine, Fortuna Silver Mines, Inc., denied it had any connection with the violence.

The people of San José Progreso were inspired, according to news stories last year, by the example of another Zapotec town, Capulálpam de Méndez, which had successfully prompted the Mexican government to close down the operations of its local mining company because water supplies for that community had been badly polluted.

A news article last week covered a meeting that had been held in Capulálpam de Méndez focusing on the rights of indigenous Mesoamerican peoples to protect themselves against the threats of mining. The Oaxacan Collective in Defense of Territories, which played an active role in the protests in San José Progreso last year, organized the conference last month.

The conference, held January 17 through 20 and titled “Yes to Life, No to Mining,” attracted over 500 indigenous leaders and community activists from 12 countries. They came to network, forge alliances, share experiences, and discuss strategies for defending themselves against the huge mining projects that destroy forests, lands, and waters. Participants felt that mismanaged mines will ultimately decimate their communities.

During the conference, leaders of Capulálpam de Méndez reviewed the ways their community has coped with its nearby mine. It had been ravaging their community for 200 years, contaminating the land with lead and arsenic, destroying the aquifers in the region, and, people argued, causing deaths and diseases in the community.

Seven years ago, town leaders pressured the Mexican federal government to close the mine, operated by the Canadian firm Continuum Resources, because of the environmental violations it had committed. The community today unanimously opposes any new mining activities. The hopeful message to other Zapotec people was conveyed by Salvador Aquino Centeno, an official from the town.

He explained that the town advocates an alternative vision for managing its natural resources, one that differs from the strategy of the multinational mining firms. “The community proposes the sustainable management of our territorial resources based on our models of communal use rather than indiscriminate exploitation,” he said. He contrasted that vision with the corporate approach of plundering and exploiting vital resources.

Other indigenous leaders from Mexico, the Central American states, and Canada, also shared their experiences and perceptions of ways to protect the land from the ravages of mining. For instance, a representative from Honduras, Dr. Juan Almendares, contrasted the way governments talk of development, but the people only see violence. And the violence they witness is often the result of resource extraction.

Dr. Almendares added that people “like to blame the violence on youth, on gangs. But we have to understand that this exploitative, extractive mining is a war against our peoples—to seize control of territories and cultures. The companies that mine lead from our lands use the same lead in the form of bullets against our people.”

The conference paid tribute to the men murdered in San José Progreso last year, and to the many others who have suffered from violent reprisals due to their opposition to the desecration of their communities.

Throughout the conference, people frequently called for unity and collective action. Those calls were captured by a declaration that concluded the conference, which was signed by 480 participants, representing 80 organizations and 50 communities throughout Mesoamerica. The declaration called for an immediate end to mining projects for which there is strong, local opposition.

It also advocated a new relationship between indigenous communities and national governments, one which recognizes the strength of local organizations, the importance of community networks, and the rights of indigenous peoples to control their own destinies.