“One voice from an Inuit hunter can be more significant than [that of] 100 scientists,” says Martin Nweeia, a Harvard University scholar who specializes in the study of narwhal tusks. An Inuit hunter, he reported, was the first person to document the way a narwhal, a small whale that lives in the Arctic, sheds its skin. The rarity of the sighting is due to the fact that scientists normally don’t spend vast amounts of time in icy waters observing wildlife the way the Inuit do. 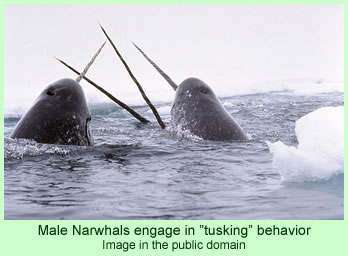 Nweeia’s observations about Narwhals are among the highlights of an article in Scientific American last week about the importance to scientists of Inuit knowledge about Arctic wildlife. The professor at the Harvard School of Dental Medicine indicated he has gotten a lot of scientific evidence and inspiration from Inuit hunters and elders, people whose ancestors have lived with the narwhals for millennia.

Nweeia also learned, from the Inuit, that the tusking behavior by narwhals is not a sign of dueling aggression, as scientists had previously thought. Rather, the narwhals rub their tusks together gently as a form of ritualized behavior. Their tusks are sensitive sensory organs that are designed to detect changing patterns in water currents. The Harvard scientist learned that the animals could bend their tusks 30 centimeters (nearly 12 inches) without breaking. He really didn’t believe that observation until careful scientific tests confirmed the flexibility and strength of the tusks.

Other scientists similarly gain useful insights from the Inuit, according to the Scientific American. Henry Huntington, at the Pew Environment Group in Alaska, says that since the Arctic is changing so rapidly, it is difficult for scientists to keep up. Changing conditions may prompt industrial developments that could harm wildlife habitats.

For instance, a huge iron ore project proposed for Nunavut might have serious impacts, not only on narwhals but also on beluga whales, bowhead whales, walruses, and caribou. Concerned Inuit are working with scientists investigating these important environmental issues.

Jack Orr, from the Arctic Research Division at Fisheries and Oceans Canada, agrees that it is important to work with the Inuit. “We have to try our best to work together in a cooperative way so that we all know as much as we can about how fragile these populations can be.” Orr mounts satellite transmitters on narwhals to try and find out more about their migration routes and diving behaviors. He relies on Inuit hunters for leads as to the best times, locations, and weather conditions for locating the whales.

Gabriel Nirlungavuk, the director of wildlife and environment programs for Nunavut Tunngavik, Inc., a group that advocates for Inuit land claims, sums up the relationship. He says that biologists realize hunters know what they are looking for and they have good eyes for spotting things. They can really help the scientists, he asserts.