The Piaroa, and the other indigenous groups in Venezuela, are speaking out in opposition to a national mining policy which they feel threatens their lives, their environments, and their cultural values. The Venezuelan Association for the Advancement of Science announced on its website last week that the Coordinadora de Organizaciones Indígenas del Estado Amazonas (COIAM), which represents Indian groups in southern Venezuela, has issued a statement protesting the proposed mining. 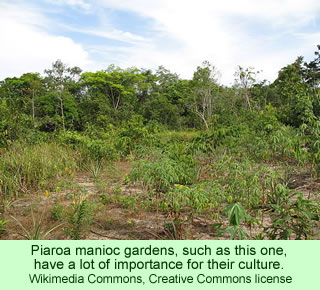 The various Indian groups met in Puerto Ayacucho, capital of the state of Amazonas, to discuss mining plans by the national and state governments that might affect their indigenous rights. COIAM includes at least four Piaroa groups among its constituent member organizations.

The Piaroa and their allies begin their statement, which the website reprints, by recognizing the progress that the national government, led by the late President Hugo Chavez, has made in seeking to promote indigenous rights. In particular, they express appreciation for the government’s efforts to protect them from international schemes that might harm their environment.

They proceed, however, to express strong reservations about mining development projects that the government has announced over the past few years, particularly an agreement it has reached with the China Transnational Company, which opens a lot of territory to mineral extraction.

The indigenous organizations especially reject the proposal referred to as the Arco Minero del Orinoco, a plan which seeks to open mines in the Guayana region, the highlands that the Piaroa consider to be part of their territory. They feel it may affect the landscape and have an impact on their cultural stability.

They question the intentions of the bilateral agreement signed with the Chinese company. The problem is that the indigenous lands have not yet been demarcated, even though the Venezuelan constitution requires such demarcations. They make it clear that the lives, health, and cultural survival of the indigenous peoples of Amazonas depend on the effective protection of their environment.

An article reviewed in this website over eight years ago helps connect these perceptions with long-term Piaroa values. The health and safety of the environment is essential to the Piaroa cultivation of their manioc gardens, and to numerous aspects of their culture that are dependent on those gardens. Mostly cultivated by women and shamans, the manioc gardens provide more than just abundant foods. They also serve to display the skills and hard work of the cultivators, foster sharing, provide venues for socializing and the performance of rituals, and remind people of the importance of the close relations they have with one another. The forests, and their gardens, are thus essential to their culture, so they need to be protected.

In early March, the same grouping of indigenous organizations, COIAM, issued a statement of condolences to the Venezuelan people on the occasion of the death of Hugo Chavez. That document discussed the ways the late president had helped the indigenous peoples of Venezuela. It expressed appreciation for the fact that he recognized their historical rights and for the way he tried to repay the debt that Venezuelan citizens owe to the indigenous people of their country.

Their message acknowledged that the Piaroa, and the other groups in Amazonas, will have a lasting respect for Chavez, who was always a friend of native peoples. Chavez, they said, dignified the lives of the poor, and particularly of the indigenous citizens of the nation.

The document extended condolences to the family of Chavez, his close friends, and to the national government, with the hope that, in the difficult time following his death, the common good and the peacefulness of the country would be maintained.