Sam Mullet and his followers were members of a cult—they were not really Amish people, according to Donald Kraybill, a leading scholar of Anabaptist studies at Elizabethtown College. Mullet, plus a number of men and women in his congregation, were convicted last September in federal court of hate crimes for aggressively cutting the hair and beards of people in the autumn of 2011. 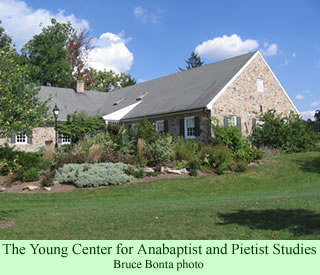 Kraybill explained his perspectives at a public seminar held at the Young Center for Anabaptist and Pietist Studies on the Elizabethtown (PA) campus two weeks ago. His views appear to be similar to those of another prominent scholar of Amish studies, David Weaver-Zercher, who gave a similar presentation only three weeks earlier. The two scholars have collaborated in writing two different books about the Amish (Kraybill et al. 2007 and 2010).

Kraybill told the 250 people who attended his talk that Mullet was a loner who didn’t really affiliate his group in Bergholtz, Ohio, with other Amish districts. His group thrived for a while after he founded it in 1995, but after he excommunicated eight families in 2006, the group started having serious troubles.

About 300 Amish bishops gathered together in Ulysses, Pennsylvania, to discuss the situation in Bergholtz. The extent and style of the excommunications were extraordinarily arbitrary, the professor said. “He was a lone ranger and was basically independent,” he told the audience.

The gathering of bishops decided to make an exception for Mullet’s actions and agreed to accept the excommunicated families into other church districts. Kraybill explained that the decision by the bishops undercut Mullet’s authority, since Amish people in Bergholtz could then disobey his whims and not fear his power over them. They could easily gain acceptance into another district, if necessary.

From that point on, according to Kraybill, Mullet’s hold on his group started to go downhill, and it became more and more cult-like. Mullet started to consider himself as pure, a figure like Elijah, and all other Amish in his mind were wrong. He thought of himself “as a prophet of God, and all the other Amish as prophets of Baal,” Kraybill argued.

The cultish characteristics increased. He subjected disobedient members to physical punishments, locked members who crossed him in a chicken coop, and sexually abused the wives of members. His attitudes and activities led to further excommunications, followed by the beard and hair cutting incidents. These activities prompted police action and then federal involvement under the hate crimes statute.

Because of all those developments, Kraybill denies, as Weaver-Zercher did, that Mullet and his followers were actually Amish. “In my opinion they were moving very rapidly in a cult-like direction, so I do not like to use the word Amish because I think they represent all sorts of things that are not at all at the heart and soul of genuine Amish faith and worship,” Kraybill concluded.

He added that neither riding around in a horse-drawn buggy, nor dressing differently, makes one an Amish person. The infamous actions in the vicinity of Bergholtz, Ohio, a year and a half ago clearly set them apart from the peaceful society known as the “Amish,” in the opinions of two leading scholars on the subject.