Nine teenage Birhor boys are now working in laboring jobs rather than in the kinds of positions they were promised when they enrolled 11 years ago at the Bokaro Steel school for underprivileged tribal children. According to a news report in The Telegraph of Calcutta last Thursday, the boys have written to the governor of Jharkhand state, Syed Ahmed, and to other officials expressing their frustration. 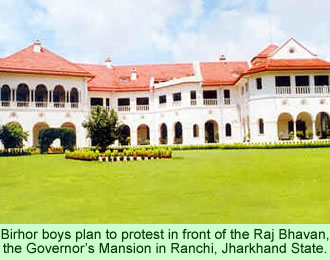 They indicated in their letter that they had been promised jobs, and that the promises by the state Welfare Department made six months ago still had not been fulfilled. One of the boys, Chandolal Birhor, told The Telegraph “we were so happy when we came to know that the state administration had cleared our names for Grade IV jobs. But now it seems that our dreams will be crushed. We have no other option but to work as daily labourers to sustain ourselves.”

Suresh Birhor, another of the nine boys, all of whom are from Tulbul, a village in Gomia Block of Jharkhand, was also willing to let his anger at the broken promises be quoted. “The authorities can only make tall promises to the endangered Birhor tribe, but when it comes to actually implementing the same, the result is zero,” he said.

These nine boys were among a group of 19 that were adopted by the steel plant in 2002 as part of its social responsibility outreach programs. The Bokaro district authorities had promised the boys Grade IV jobs within the government if they passed all the exams, which the nine did last year.

A. Raj Kamal, the Bokaro deputy commissioner, responded to an inquiry from the newspaper by saying that he was new to his job and was unfamiliar with the situation. But he promised to investigate. The Bokaro Steel program to help the Birhor get educations has been featured many times in the Indian press—the huge company has not been shy in touting its social responsibilities to India. Stories about the steel plant and the Birhor boys have been picked up by this website in November 2010, June 2011, and July 2012.

Fortunately for the Birhor, the Indian press takes an interest in their issues. The Telegraph carried a story last July describing the plight of four of those same Birhor boys who were already complaining that they had not gotten the jobs they had been promised. Chandolal Birhor, Santosh Birhor, Ganesh Birhor, and Tobolal Birhor, all of course from Tulbul, were already concerned that four months had elapsed since they had passed their final exams.

Despite having finished their schooling, they were earning Rs 70 (US$0.018) per day as laborers, rather than roughly five times that amount which they could be earning as government office workers. They had met with then Bokaro Deputy Commissioner Sunil Kumar earlier in July and had received his promises of help.

Chandolal Birhor, whose education has obviously encouraged him to speak out, told The Telegraph on that occasion, “we came all the way from Tulbul, which is 70 km away, to study, earn a decent living and support our families. We stayed away from our near and dear one[s] because we were promised government jobs. But today, we are loading sand on trucks for a private contractor for Rs 70 a day, which is even less than the rate the government has fixed for daily labour.”

Ganesh Birhor seconded his colleague’s opinions and added that the district welfare officer had promised them jobs shortly after the results of the examination were announced last May. Congratulating the boys, the official had added that jobs “were a few steps away.” The report last week indicates that the nine are planning to start protesting right in front of the state governor’s official mansion, and to launch a hunger strike.