As peaceful as some Inuit groups may once have been, today they experience incredibly high rates of suicides—partly caused by childhood abuses, according to a recent study. The study was released last Wednesday at a news conference in Iqaluit and discussed on the website of the Canadian Medical Association Journal, where it is the first of four articles on the subject. 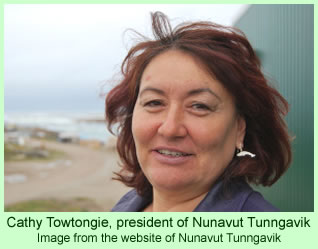 Cathy Towtongie, who is the president of Nunavut Tunngavik, an organization that promotes the social, cultural, and economic well-being of the Inuit, said at the news conference, “this study provides us with a clearer understanding of the reasoning behind suicide. It’s my hope that it will lead to a better understanding of suicide and allow for a better prevention of suicide in the future.”

The study, prepared by researchers from two groups at McGill University in Montreal—the McGill Group for Suicide Studies and the Douglas Mental Health University Institute—is titled “Qaujivallianiq Inuusirijauvalauqtunik, Learning from Lives that Have Been Lived.”

The statistics on Inuit suicides quoted by one of the authors of the study are overwhelming. Suicides in Nunavut among the Inuit are about 10 times that of the rest of the Canadian population, about 110 deaths per 100,000 people, compared to 11 per 100,000 for the rest of Canada. Among young males, the figure is far worse—500 per 100,000—almost 50 times the national average. And it gets worse. In 2012, 27 Inuit in Nunavut committed suicide. Less than halfway through 2013, there have already been 21, an incredible jump for a territorial population of only about 34,000.

To do their investigation, the researchers studied RCMP and medical records of the 120 people who had committed suicides from 2003 through 2006. The investigators identified two major factors that put Inuit people, especially the youth, at risk of suicide: mental illnesses, and childhood sexual and physical assaults.

Dr. Eduardo Chachamovich, an assistant professor and psychiatrist at McGill and a co-author of the report, indicated that 54 percent of the suicide group suffered from major depressive disorder in the six months before they took their own lives, compared with only 8.3 percent of the Inuit control group.

Natan Obed, an official with Nunavut Tunngavik, said that “the link between childhood sexual and physical abuse and over-arching risk for suicide is something that is very pronounced in the study and it reinforces our concern about these topics.” He added, “we don’t feel we can make huge strides on suicide prevention or a host of other mental health conditions unless we do more to ensure that children are growing up in safe and healthy environments.”

Obed and Chachamovich both expressed grave concerns about the abuse figures. A Canadian Auditor General’s report in 2011 showed that sexual assaults on children in Nunavut were 10 times the Canadian average—44.3 incidents per 100,000 people, compared to 4.3 per 100,000 in the rest of the country.

Obed argued that Nunavut needs a lot more financial support from the federal government to help the territory combat abuses of children and the subsequent suicides of the victims. Chachamovich made a similar point. “If we had those figures anywhere in the south, it would be a major crisis. People would be talking about it every day in the papers, on the streets. There would be a big outcry for more resources and more help.”

The professor added that Nunavut has no psychiatrists, and many permanent communities don’t even have a family doctor. Psychiatrists and doctors visit some communities only sporadically. He argued that aggressive and consistent delivery of suicide prevention programs is necessary in order to bring the rates down. The numbers are clear, he maintains.

Interviewed by CMAJ in Montreal, Chachamovich concluded, “the model of health professionals waiting for people to come and talk to them about whatever is happening—a passive model— … doesn’t work up there [in Nunavut]. You have to have an active model where you go and reach people.”