Last week a guest blogger for the Christian Science Monitor reported that Ohio Amish farmers are being cheated by Marcellus shale fracking companies, which know that they will not sue them for fraud. 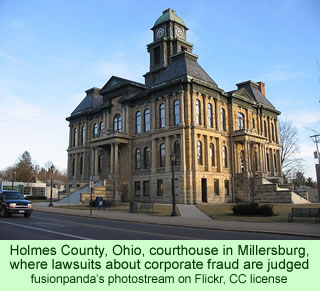 James Burgess, the Monitor blogger, cited an earlier report in the New Republic that discussed the story of Lloyd Miller, an Amish farmer near Millersburg, in eastern Ohio’s Holmes County. Mr. Miller was contacted by an agent from the energy drilling company Kenoil. The agent offered the farmer $10 per acre for a drilling lease, telling him that that was the going rate in the area. The farmer talked it over with his wife and since they own 150 acres, they were quite tempted.

They needed the money so they signed. Then, they learned that the going rate in their area is $1,000 per acre. Mr. Miller talked with an attorney, who told him that the statement by the agent, that $10.00 per acre was the going local rate, was fraudulent. The farmer had a good case for suing the company in court. The difficulty was that taking someone to court in Holmes County would be contrary to Amish beliefs.

Mr. Burgess suggests that one might blame the Amish for not checking up on the facts themselves before signing leases. The problem is that the energy companies deceive the Amish landowners by showing them out-of-date leases when they make their fraudulent pitches to unsuspecting farm families. A local Ohio law firm contacted several Amish families, and all reported that the energy companies had duped them too.

The Amish refuse to take the fracking companies to court, Ms. Thompson emphasizes, because of comments by Jesus in the Sermon on the Mount. They accept literally his statement that one must turn the other cheek. If a man is sued for his coat, he should give his cloak also. The Amish interpret those statements to mean that they should not try to redress wrongs committed against them in the courts.

And the nasty implication of this, according to Ms. Thompson, is that the fracking companies are well aware of the Amish predicament. They can cheat them and not worry about being sued. Amish peacefulness, in other words, may have severe costs at times.

Some Amish bishops are suggesting that members of their districts can go into court, with the help of attorneys, and ask for declaratory judgments by judges, who will interpret contracts. There are no monetary judgments, but even so, many Amish are not comfortable with that possibility. Ms. Thompson suggests that the best remedy is for the word to get around to all members of the Amish community to be more careful of the fracking agents.

One feature of the Grist story is that it provides a link to the original New Republic article, written by Molly Redden, published on their website on June 6th, and available for free access. The full story provides lots of interesting additional details. For instance, when Mr. Miller, the Amish farmer, was told by the attorney that he could take Kenoil to court, he replied quickly that that is something they just don’t do. And what about the agent? “He’s got to live with his conscience,” Miller replied.

Ms. Reddon, in discussing the Amish reluctance to take opponents to court, referred to a 2011 case when the U.S. Securities and Exchange Commission charged a local Amish man, Monroe L. Beachy, with running a Ponzi scheme that had bilked many investors out of some $17 million—a smaller version of the famed Bernard Madoff Ponzi scheme. A committee representing about 2,500 Amish creditors requested the judge to dismiss the case against Mr. Beachy in order to allow them to divide up the debts among themselves.

The New Republic article does discuss one example of a case in which an Amish farm couple, Levi and Mary Yoder, did, in fact, sue a gas company, Columbia Gas. The couple charged that the company had drilled illegally on their land and cheated them out of $750,000 worth of gas.

The judge found in their favor, and ordered the company to pay the Amish couple $900,000. He increased the award because, after the couple filed the suit, the company had approached the local Amish bishop, urging him to talk to the Yoders and remind them of their prohibition against court actions. The company was, in essence, trying to use Amish religious beliefs to its own advantage. Ms. Reddon also discussed the issue with an attorney for Columbia Gas, who offered a very different explanation for his company’s actions.

Ms. Reddon explores the ramifications of other contract problems between Amish farmers in Ohio and gas drilling companies. One farmer tried to block any further drilling on his property by buying an old, existing well on his land. However, two national energy companies, Devon Energy and EnerVest, quickly moved to block his effort. They knew that they would win, since they were well aware that the Amish normally don’t sue anyone.

Attorneys in eastern Ohio reported to Ms. Reddon that the Amish do come into their offices on occasion and complain about both civil and criminal wrongs committed against them. One told the New Republic that he had had Amish people forgiving five figure debts, rather than attempting to collect those amounts in court. Another said he recalled Amish people avoiding court even in criminal cases. An Amish man had been horsewhipped by some burglars in his home, but he refused to press criminal charges.

When she was finishing her interview with Lloyd Miller, Ms. Reddon asked him if he were envious of his neighbors, who were able to sue the gas companies when they cheat them. Mr. Miller looked out the window for a moment and replied, “basically, you have to laugh it off, because it will spoil every day you wake up.”