Back in April, the Piaroa, and other Indian groups of southern Venezuela, issued a statement protesting a recent national mining policy that threatens their forest. News stories in the last few weeks indicated they are getting more insistent—they want to be heard. 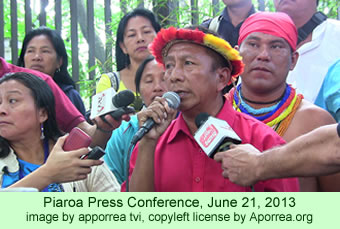 According to a report early last week, the group Coordinadora de Organizaciones Indígenas del Estado Amazonas (COIAM), which was fostering the protests three months ago, spent the week in Caracas searching for answers to their questions about their lands. They approached the ministry on indigenous rights, called the Ministerio del Poder Popular para Asuntos Indígenas, but they were ignored.

The Piaroa and their allies expressed their appreciation for the efforts that the government has made for indigenous rights, but they are apprehensive about a convention signed with China that provides for mineral exploitation. The agreements, and the mining that they imply will be coming, could destroy their ancestral lands and the natural environment of the upper Orinoco region.

The indigenous people held a press conference in the Plaza Armando Reverón in Caracas on Friday, June 21, where they spoke about their frustration with the lack of openness of the government. They also called attention to other problems they face, such as education, social planning, and health.

According to one news report, Guillermo Arana, a Piaroa, urged the Venezuelan government to begin a dialog with the Indian groups in order to review the proposed projects. The goal would be to maintain as much normalcy as possible in the indigenous communities if mining does take place. He emphasized that the indigenous people are generally in favor of development, but they want to be part of the review process for proposed projects to make sure they will not harm their cultural patterns.

He emphasized that the development of extractive mining has been discussed in 20 different indigenous communities in the region, and the people are concerned about preserving the natural environment. They also expressed alarm about the climate of violence that can develop in communities where prospecting is going on.  They asked the government to take action to prevent this from happening.

Mr. Arana reiterated that the people are not in opposition to the state of Venezuela. They just want an effective dialog about land issues.