Recent news in Cavalier County, North Dakota, stirs up memories of major events in American peace history, even though the current developments are relatively mundane. A news report last week indicated that the Cavalier County Jobs Development Authority (CCJDA) is renewing its efforts to buy an abandoned anti-ballistic missile complex in the county. 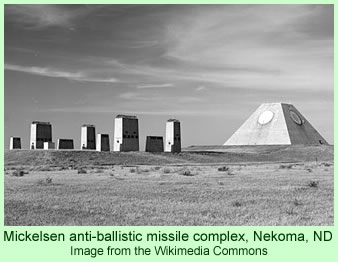 The back story is important. Six months ago, the U.S. government auctioned off the Stanley R. Mickelsen Safeguard Complex, located one mile north northeast of the village of Nekoma, which is 75 miles to the northwest of Grand Forks, in the rolling prairie land of the state. The CCJDA wanted to buy the complex for its development potential, but the winning bid came from a Hutterite colony. The CCJDA is attempting to buy at least the buildings from the Hutterites.

The agency in Cavalier County plans to develop the property into a facility devoted to unmanned aircraft systems (UAS), popularly known as drones. Its plans, under development for nearly 10 years, include a UAS training and education center, a data storage center, a business park for UAS research, and an interpretive center for Cold War history. The 431 acre tract of land includes numerous buildings dedicated to the 1970s-era goal of destroying nuclear missiles coming from the Soviet Union with locally launched, nuclear-tipped, interceptor missiles.

The Spring Creek Hutterite Colony made the winning bid of $530,000 last December after the development group, CCJDA, stopped bidding at $500,000. The journalist writing up the story suggests that the Hutterites may be planning to use the land for agricultural purposes.

However, since the Spring Creek Colony is located in Forbes, N.D., 180 miles south of Nekoma, the Hutterites also may be planning to use the grounds as the nucleus of a new colony some day. Spring Creek is not responding to requests for information.

The Mickelsen Safeguard Complex was designed and built to protect ICBM missile launch silos near Grand Forks from possible nuclear attacks. Though other such anti-missile missile sites were planned, Mickelson was the only such complex actually built. According to the Wikipedia, it was deactivated in 1976, shortly after it had opened, as politics and international rhetoric had moderated.

The federal government stipulated in the sale last December that the purchaser had to maintain the historic character of the facades of the buildings, which occupy about one-third of the 431 acres. One of the buildings, a huge concrete pyramid with four large eyes on its faces for its radar installations, is visible for miles across the prairie.

An article three years ago in a Bismarck paper provided the history of one anti nuclear war protest that focused on the Mickelsen complex. On May 16, 1970, about 1,500 people gathered near the complex, which was still not operational, to protest the folly of nuclear war, of mutually assured destruction, of the insane notion that one side might actually survive such a holocaust.

The Hutterites in the Dakotas of course also have a history of strongly opposing warfare, though they protest in their own way—through not fighting back, through nonresistance rather than active, or even passive, confrontations. In 1918, four young Hutterite men from South Dakota were tortured by the U.S. Army for refusing to participate in any military activities. Their absolute opposition to fighting and war irritated the soldiers so much that they tortured the men relentlessly. Two of them were tortured to death at Fort Leavenworth, Kansas.

The Hutterites quickly abandoned their United States colonies and moved north to Canada, which at the time was more welcoming to absolute pacifists, though some subsequently moved back to the U.S. and developed colonies again. All of this history, of protests against war and violence stretching back nearly a century in the Dakotas, is brought back to life by the current news about a Hutterite colony purchasing a former anti-missile complex.

The Hutterite interest in the site is, well, interesting. Are they simply planning an expansion of their colony? They must be aware of the symbolism of the Mickelsen site, which suggests that the violence of nuclear missiles can prevent war. Do they plan their own interpretation of its history?

If the Hutterites would develop an interpretive center at Nekoma, would it present a different view of the history of Mickelson than the one planned by the Cavalier County agency that is focusing on drones? Will the Hutterites build a museum or visitors center that celebrates the different ways of peacefully protesting warfare that their regional history suggests? Hopefully, the Spring Creek Colony will provide clues as to its intentions for the historic property at some point.