Thangaraj, a 23-year old Paliyan man in Tamil Nadu, India, posted some complaints on Facebook about delays by government officials in dealing with problems in his community. His strategy for publicity worked, according to a news report last week. 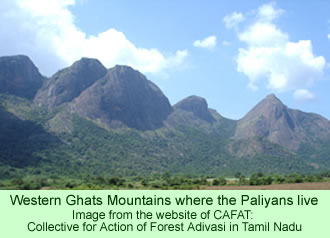 As the only person in the Alagammalpuram Colony near the city of Madurai to have gotten some education, he was able to lead the protest. Thangaraj publicly asked, via the social medium, the District Collector in the state, Mr. Anshul Mishra, why some basic amenities and housing had not yet been provided to the Paliyans, as required by Indian law. He quickly got attention.

Mr. Mishra saw the Facebook posting and called a meeting at the Paliyan community so he could listen to their problems. One of their issues is their desire to have free access to the forests of the Western Ghats, their traditional mountainous home territory. He quickly responded by telling appropriate Forest Department officials to allow the tribal people to visit the forests without further hassles.

According to G. Dhanraj, a tribal rights activist, the Paliyans also demanded tracts of land that they are supposed to be given under the provisions of the Forest Rights Act of 2006. Provisions of the law, which decree that the tribal people are entitled to concrete dwellings and good drinking water, are not being met. Furthermore, the Paliyans demanded identity cards which will help them avoid being harassed by officials.

The Alagammalpuram Colony was established by the Tamil Nadu state government in 1980 to wean the Paliyans out of their nomadic foraging way of life and settle them into a permanent community. The journalist for The Hindu, the newspaper covering the story, wrote last week that the 17 houses in the colony are now in dilapidated condition.

The residents of the settlement collect nuts, fruits, roots, honey, and twigs from local forests, and they gather grasses which they make into brooms, presumably for sale. They also work for meager wages at nearby farms and mango plantations, where they get paid mostly in rations of rice.

The reporter asked Sadaiammal, a 50-year old Paliyan person, about working under the Mahatma Gandhi National Rural Employment Guarantee Scheme. The response: “During the last season we worked for a couple of days, but we were [treated badly] and the others did not like our presence. So we stopped going for work.” They work seasonally at best, and rely on rice handouts the rest of the year.

The reporter also spoke with three children, siblings, all of whom were dressed in soiled, threadbare uniforms. Playing around a small temple, they said that they did not have any other clothing to wear. Also, they admitted they didn’t go to school regularly, since the people in the government school are unfriendly toward them.