Thousands of Ladakhis last week protested a terrorist attack on the Mahabodhi temple at Bodh Gaya, in Eastern India, a spot revered by millions of Buddhists worldwide. 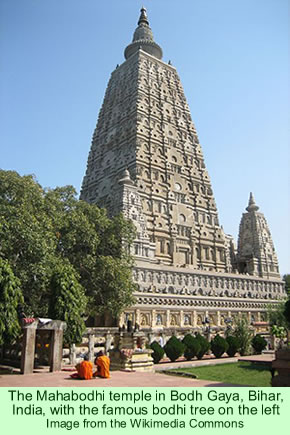 The ancient temple complex in India’s Bihar state was erected on the site where Buddhists believe that Gautama Siddhartha, the Buddha, sat and meditated under a bodhi tree and gained enlightenment. After a further period of meditation, he began to travel and teach about Buddhism.

The Mahabodhi temple, perhaps built about two thousands years ago and now a UNESCO World Heritage Site, consists of an elongated spire 55 meters high plus a bodhi tree supposed to be a sapling taken from a bodhi tree in Sri Lanka, which devotees believe was taken as a sapling from the original tree under which Buddha gained his enlightenment.

For reasons that are still not clear, and the news accounts differ, terrorists detonated four or five bombs in the temple premises at the beginning of last week, plus several others at an adjacent monastery. Other bombs were defused. Fortunately, all were fairly low intensity and no one was killed in the blasts. After the first bomb went off, the temple complex was filled with smoke.

An eye witness, Rakesh Kumar, reported that 200 or so people panicked. “It was really terrifying. I am grateful that Lord Buddha saved us,” he told a reporter. The only damage to the temple was to some stairways near the bodhi tree, plus some broken windows, according to an official at the temple. The temple has rapidly grown into an international pilgrimage site in recent years.

The news prompted outrage from Buddhists in Leh, the capital of Ladakh, 800 miles to the northwest. The Ladakh Buddhist Association called for a bandh, a uniquely Indian form of peaceful protest in which, generally, shops, businesses, and public transportation will close for a few hours or a whole day.

On Monday, July 8, Leh was completely shut down, including most government offices, schools and businesses. The roads were deserted. Thousands of Buddhist monks, nuns, and local people formed a procession in the city protesting the attack on perhaps the holiest shrine in the world for Buddhists. They demanded that India should provide security to the Mahabodhi temple equal to that provided for other important temples, churches, and mosques in the country.

The next day, the Ladakh Autonomous Hill Development Council, a governmental organization in the region, strongly condemned the attack on the temple.