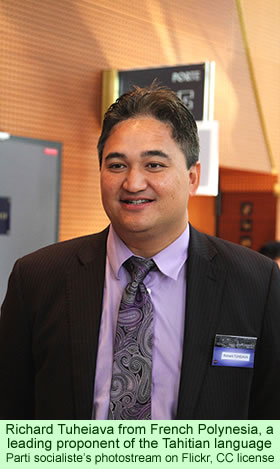 Édouard Fritch, the President of the Territorial Assembly, asked the President of France last month to help change French laws which require debates in the assembly to be conducted exclusively in the French language. Two laws had been struck down by the Supreme Court of France because the debates on those measures had been conducted, in part, in Tahitian. Fritch pointed out that the debates are translated simultaneously, and that the records of the debates are kept in French.

Last week, the Territorial Assembly passed a resolution requesting that France should recognize Tahitian officially. It asked the president of France to introduce a bill into the national legislature to amend the constitution so it would recognize the language.

Oscar Temaru’s pro-independence party, which is now in the minority in French Polynesia, abstained from voting. One member voted no, however, reasoning that Tahitians did not need the permission of France to speak their own language. Temaru himself added that he would like to have the French language banned in the assembly.

Richard Tuheiava, a senator from French Polynesia, said that the people should not have to ask permission of the government in France on matters like this. “The use of the … Polynesian language is something that is inalienable and inherent to the identity of the Maohi [Tahitian] people—the native indigenous people of French Polynesia,” he said.

The senator explained that Tahitian is widely spoken throughout all of the archipelagos of French Polynesia, each of which has its own languages. Tahitian, however, is clearly the dominant language. “I would say that 75 per cent of the population here in French Polynesia is Polynesian, and out of this…more than half speak the Tahitian language,” he added.

The language is clearly not disappearing, he said. The Tahitian language has been an important part of the work of the assembly since it was created, and asking permission of France to continue to use their own language represents a step backwards, in his opinion.  He refers to it as “begging the French government” for permission to speak in Tahitian.

Senator Tuheiava links the preservation and use of the language with the identity and culture of the Tahitian people. “We are obliged … to assert, or to reassert, our identity through our language, our culture, and our land. [This] means that we have to advocate, of course, for the recognition of the official-ness of the Tahitian language.”