What prompts violence and warfare among human beings? What are the best ways to promote peacefulness within societies, and peace between them? Is humanity fundamentally aggressive? 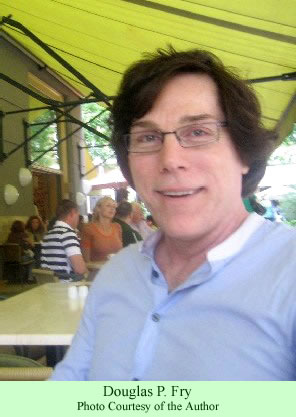 Numerous scholars and writers have argued all of those questions. Some seek to prove that all humans are warlike in nature. Their arguments have been based, in part, on assumptions that hunter gatherer societies were frequently at war, facts supposedly derived from the anthropological literature.

Douglas P. Fry and his colleague Patrik Söderberg, both at Ǻbo Akademi University in Vasa, Finland, have written a brief but fascinating article for this week’s issue of Science that addresses those arguments.

Fry and Söderberg review what they call mobile forager band societies (MFBS). They cite several studies, works which have argued that hunter gatherers are, or were, often at war. Warfare is therefore broadly pervasive among human societies, or so the argument goes, and humanity is basically warlike in nature.

The authors suggest, however, that a variety of factors should predict that this is not so. They list nine such predictive issues, such as the observation that the sizes of groups of people in these societies are usually too small to support warfare. Furthermore, the structures of their groups do not facilitate the formation of warlike alliances and they tend to have egalitarian social networks without the need for strong leaders.

But Fry and Söderberg went beyond making suppositions in order to develop a careful research strategy. They extracted a sub-sample of 21 societies from the standard cross-cultural sample (SCCS) using a method that prevented sampling bias. Then they examined the primary scholarly works about each of the societies identified in order to tabulate the instances of lethal aggression in the literature.

Their detailed tables with their findings are presented in supplementary online pages included with subscriptions to the journal, but the results are summarized by the article. They identified 148 instances of lethal aggression in the 21 MFBS. Of those 148, 135 included unambiguous data about the perpetrators and victims of the lethal violence.

They found that 36 percent of what they call “lethal events” occurred right within the small bands—usually consisting of extended family groups—and for 85 percent of the total lethal events, the perpetrators and their victims were members of the same society. The remainder involved people from outside the society: missionaries, colonists, or individuals from neighboring societies. Females were the perpetrators of the violence for only 4 percent of the events. Furthermore, 55 percent of the incidents involved just one killer and one victim. In essence, while there was some violence, incidents of warfare were rare.

Reasons for the violence varied widely, as would have been expected, but most of the events involved what the authors consider to be personal reasons. A large number were related to men fighting over women, unfaithful spouses, revenge killings, interpersonal disputes, thefts, and so on. The authors found that of the 21 societies they looked at, the Tiwi of Australia accounted for nearly half of the incidents of violence, 69 out of the original 148. Their results look far different when they look at just the 20 societies without the Tiwi.

For instance, intergroup disputes resulting in violence accounted for one third of the lethal incidents, but the Tiwi account for three quarters of those. Thus, if the Tiwi results are dropped out, intergroup violence (that is, some type of warfare) drops to only 15 percent of the whole list. Also, regular strings of killings occur frequently in the Tiwi literature, but not nearly so often in the other 20 societies.

From all of their data, the evidence clearly shows that 20 of the 21 MFBS are not especially warlike. Also, the authors write that there were very few instances of violence caused by scarce resources, one of the arguments often made by advocates of the warlike-humanity school of thought.

The authors note that about half of the societies experienced violent events that involved only single individuals. Thus, the facts they turned up about this scientific sampling of MFBS show quite effectively that statements about the prevalence of warfare in among hunter gatherers are not supported by the evidence.

In making their arguments, Fry and Söderberg are infallibly polite and respectful to their opponents, one of the best aspects of the article. Their evidence points to the conclusion “that killing is an exceptional event in human societies…” This is a fascinating study of an issue that is quite important for understanding human peacefulness. Highly recommended.