The Yanadi were stigmatized as a “Criminal Tribe” by the British, and while they are still very poor, a recent series of articles suggests conditions may be improving. The Hindu, a major paper in India, has run three news stories over the past year on a small Yanadi hamlet in Andhra Pradesh. They report some fascinating bits of information about the hamlet of Pamulametta, in the Jegurupadu Panchayat (village) of the state. They especially focus on the work of a progressive headmaster in the hamlet school. 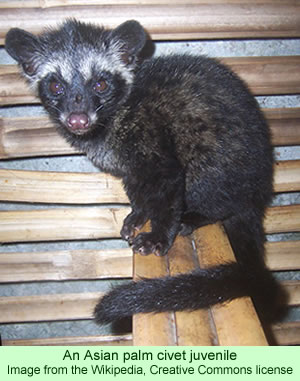 An article at the end of June described how a wild civet came into the yard of the primary school and the headmaster, Chilukuri Srinivasa Rao, captured the animal and fed it fruits and vegetables. He explained to the Yanadi children that the civet, which looks somewhat like a cat, is known for its musk glands. They produce a substance that has been harvested for a long time by people for perfumes.

The headmaster said that the mammals used to be raised for the musk, but concerns expressed by animal rights groups, and the availability of synthetic substitutes, have nearly eliminated that business. There are numerous genera of civets, but to judge by the picture showing Srinivasa Rao holding the animal, it appears to be an Asian palm civet, Paradoxurus hermaphroditus.

The Hindu published an article back in September 2012 that may not have included a cute picture of a man holding a charming animal, but it did provide more information about the Yanadi people in Pamulametta. The ancestors of those Yanadi apparently migrated to their hamlet in the northeast sector of the state, the East Godavari District, 90 years ago from the Nellore District, 200 miles away near the city of Chennai.

At first, they subsisted on catching snakes and selling the skins in the local market. But the passage and enforcement of the Wildlife Conservation Act prompted them to abandon that and, instead, catch venomous snakes in the village and let them go in the country. Since the Yanadi are also known for hunting rats, they have helped farmers in the area by catching the rodents whenever their services are needed.

The government started a primary school for Yanadi children in the hamlet eight years ago, but administrators at first had problems attracting teachers. Mr. Srinivasa Rao, who has won several teaching awards at the state level, was willing to come to the hamlet and turn things around.

He worked with the sarpanch at the time, Ms. Y. Devadeevena Kumari, in developing the school programs. Sarpanch is the term for the mayor of a panchayat. They arranged for clothing, notebooks, haircuts, and bags for the 30 children who began attending the school. The teacher got the kids to start drawing as part of their schooling.

Two years after Mr. Srinivasa Rao had started, the school had changed dramatically. Paintings on the walls conveyed the idea of the importance of education and the value of avoiding alcohol. The former president of India, Dr. A. P. J. Abdul Kalam, gave an award to the school. It has also recently received an award as the best school in the district. Furthermore, most of the Yanadi men in the hamlet are now avoiding liquor, and the community is nearly alcohol free.

Last week, The Hindu carried its latest story about Pamulametta. Because of a quirk of Indian law, the paper reports, the post of sarpanch of Jegurupadu in an upcoming election is specifically reserved for a woman from a scheduled tribal community. The rich people of the panchayat have been flocking to Pamulametta, courting the support of the Yanadi women. (Another story in The Hindu this week reports that a Yanadi man is contesting the position of sarpanch for a different panchayat in Andhra Pradesh in local elections scheduled for July 31.)

The difficulty is that the candidate must be chosen from among only 110 registered voters out of the 200 Yanadi living in Pamulametta. Oddly, the candidate for sarpanch, according to regulations of the Election Commission, must have no more than two children, must have been a resident for at least five years, and must not have any criminal background. That last point is fascinating, considering Yanadi history.

The Yanadi were designated as a “Criminal Tribe” under the terms of the “Criminal Tribes Act,” a series of laws passed by the rulers of British India. The law, first passed in the 19th century and modified repeatedly, accepted the notion that when members of a tribal society were convicted of crimes like burglary or theft, the entire society could be classified as “criminal”. People such as the Yanadi were not only stigmatized, they became the subject of police harassment and restrictive regulations.

According to a journal article by P. C. Reddy published in 1947, because the Yanadi were excluded from society by the caste system, some of them did, indeed, turn to theft and burglary for their livelihoods. The Indian Criminal Tribes Act was an attempt by the British government to handle people such as the Yanadi, some of whose members coped with discrimination by committing such offenses.

Once a tribal society in a district was labeled as a “Criminal Tribe”, adult male members were then registered and required, for an indefinite period of time, to report to the nearest village police official at 11 pm and again at 3 am every night. A member of a Criminal Tribe accused of a crime could be convicted simply if he happened to be absent from his home that night. The Wikipedia article on the Criminal Tribes Act gives a detailed update on the haunting, and deleterious, legacy of those discriminatory laws for the 60 million people today who are descendents of those “criminal tribes.”

Considering that history, it is fascinating that candidates for the position of a village sarpanch now must be found from within a small Yanadi hamlet.